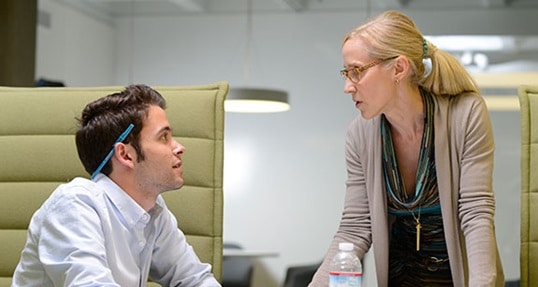 The Surest Way to Make a Woman Angry at Work? [Huffington Post]

Written by Cari E. Guittard, Professor of Global Management, Corporate Diplomacy, and Women’s Leadership at Hult International Business School, for the Huffington Post “The Surest Way to Make a Woman Angry at Work? Call Her This“

Emotional. This term raised quite a debate during my recent Women’s Leadership course at the Hult International Business School and it was one of the five brave men who took the class who brought it up. “It is a given women are more emotional than men,” one of the students remarked. “Why can’t we talk about women being emotional?” asked another well-intentioned student. I could immediately see the women in the room bristle, wince, sit up straighter in their chairs in annoyance and defiance. Before we went into the issue of women and emotions, I instead asked the men to share their reactions when a women shows emotion.

The universal responses, that I’ve heard numerous times in executive seminars as well, fell into three well known categories: Flight, Fix, and Fight. This was evident when one female student teared up during a particularly intense and personal exercise the session before. The female students nearby immediately offered tissues, asked if she was okay during the break and offered their support. The male students, many of whom were seated just behind her went stoic and all fled the scene during the break not wanting to engage.

The female student rightly brought this issue up in the context of our discussion on emotion and asked, “Why didn’t one of you ask if I was okay or offer any gesture of kindness or support? This I would expect from a group of men who are seemingly more in tune with women’s issues given that you chose to take this course.”

The men shared that when a woman becomes emotional in their presence their first instinct is to flee. They believe that women are irrational when they are emotional. Best to get out of the way, let the storm pass. And if they must engage then their next instinct is to try and fix the issue which more often than not gets them into further trouble. “We can’t win,” one male student responded, “You don’t want us to leave when you’re upset and you don’t want us to fix the issue that created distress — even if we have the solution — so what do you expect from us?”

Here I had to stop the conversation and correct a massive misperception that permeates the workplace. Experts in Gender Intelligence and those who have studied the differences between the male and female brain argue that women are just as rational when they are emotional. As Barbara Annis, the pioneer in Gender Intelligence shared in a recent post, “Actually, women are oftentimes more capable than men are of experiencing strong emotions and thinking rationally at the same time.

A woman’s emotional response and personalization of an issue can often be the perfect complement to a man’s instinctive capacity to externalize the issue and take immediate action.” This is an advantage to the male brain as a woman who has her emotional receptors engaged is on high alert and far more likely than a man to be deeply tuned into and aware of her environment, contextual stimuli and the people around her. In a negotiation situation this can be extremely valuable if leveraged appropriately.

Stop Labeling, Start Appreciating the Strengths of Men and Women at Work

It is time both men and women become smarter at understanding and appreciating our differences. There are inherent, complimentary strengths in both the male and female brain with deep implications for how we interact at work and at home. One of the best resources to learn more and gain further practical insights into these differences is Barbara Annis’ brilliant book Work With Me: The 8 Blind Spots Between Men and Women at Work. I read it and immediately bought a dozen copies to give to male and female colleagues around the world. It really should be required reading starting in junior high if not before.

“So if being emotional is a positive thing,” asked one of my male students, “then why don’t more women own it? Why can’t we use the term emotional and talk about emotion more freely?” I responded that there is a universally negative social context to the use of the word in the workplace and men need to stop labeling women ’emotional.’ Calling a woman emotional is the surest way to piss her off, lose her trust, and get into an argument you’ll never win.

Hult offers a range of highly skills-focused and employability-driven business school programs including a range of MBA options and a comprehensive one year Masters in International Business. To find out more, take a look at our blog Women in business: advantages, challenges, and opportunities. Download a brochure or get in touch today to find out how Hult can help you to learn about the business world, the future, and yourself.