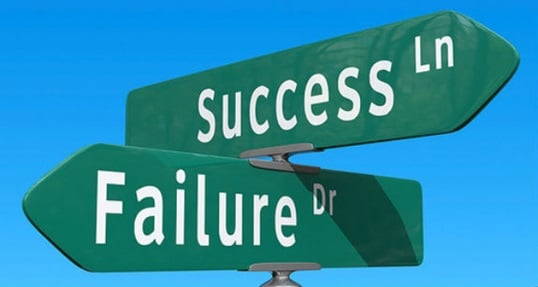 The Best Way to Deal With Failure? Fail (Repeatedly)

Imagine you experienced a failure at work. The memory of it plagues you, and you just can’t shake it. You visit a doctor to explain your condition, and she administers a shot, prescribing a nap to immediately follow it. You steal away for a quick snooze, and when you wake up the memory is gone—forever. Sound like a scene out of science fiction? How about one in the not-too-distant future?

There is no question that an incident involving failure—either small or spectacular—can lodge into your memory bank like a heavy stone. But moments of failure (OK, sometimes they feel like decades) can teach us a lot about ourselves, and what to do differently the next time. There’s a lot we can learn if we don’t try to stuff failure into a drawer right after it happens, or hide it away in a closet to keep company with the cobwebs and holiday decorations. Resist that temptation to throw it away, because it’s an opportunity to become smarter.

But as we all know, it can be hard to embrace failure when it’s staring us in the face. Most of us have been conditioned from a very early age to achieve, to win, and to get all the answers right. To appear wrong is to appear weak, or so we’re told. And that “pain” you’re feeling? Most likely: bruised pride. Many times it’s this pride that keeps us from leveraging the pearls that lie just below the surface of a perceived failure.

Although many of us strive with all our might to avoid failure (a truly impossible feat), we do so at a cost. We may find that our ability to bounce back has atrophied. And just like there’s no crying in baseball, there’s also no moping (for too long) in business after experiencing a setback—although there should be plenty of reflection to let all the lessons bubble up into your conscious memory. To succeed as a professional, you need resiliency just as much as you need traits like ambition, skill, and creativity. Because here’s something you can always count on: failure is inevitable. And until there’s a vaccination to ward against it, the best remedy is the ability to roll with life’s unavoidable punches.

So how about rethinking what failure means? Dyan Williams, in her article “Change Your Definition of Failure: It’s How You Get Better” has some sage words: “A failure that results from well-designed and well-intentioned experimentation can be worthy of praise. And regardless of whether failure offers any real value, it’s a common occurrence in our uncertain environment and a natural part of human existence.”

If it’s your goal to be a leader of a team, division, or company, you have to have experienced setbacks in order to know how to lead your team through them. Think of the first time you spoke or presented in front of a large group of people. It was probably terrifying. But what happened after the third time, the fifth time—the tenth time? It probably got a bit easier, even if the terror never fully went away. You developed the skills to deal with the unease, alongside the ability to address an audience and keep its attention.

In the article “Why Failure is Good for Leaders,” Dorie Clark quotes author, Annemarie Neal, as saying: “If you haven’t learned [to fail], when it gets to the big game, you’ll never have the resources to get over the hurdle.” Wrote Clark: “You need executives with the courage to move forward anyway and be willing to fail faster and smarter.”

So before you hold out your hopes that scientists come up with an easily accessible means toinoculate against bad memories that keep you awake at night, keep in mind that those memories can be good reminders of the times you cut corners to get something done, chose not to delegate, or failed to listen. Those memories can serve as reminders to nudge you into make different choices—and those just might lead to a rosier path.

Also keep this in mind: when Akita Morita co-founded Sony, the company’s introductory product was a rice cooker—that consistently burned the rice in it. And there’s Colonel Sanders of Kentucky Fried Chicken fame, whose chicken recipe was turned down approximately 1,000 times. He finally met his goal of opening his famous fast food business at the age of 65. And here’s a final story: Walt Disney was once fired because “he lacked imagination and had no original ideas.” In November of 2012, at the end of its fiscal year, the Walt Disney Company reported a record $42.3 million dollars in revenue, up 3% from the previous year. These business pioneers knew failure—and succeeded despite of it. Maybe even because of it.

Hult offers a range of highly skills-focused and employability-driven business school programs including a range of MBA options and a comprehensive one year Masters in International Business. To find out more, take a look at our blog Top 5 failure quotes: Who’s ready to fail in 2019? Download a brochure or get in touch today to find out how Hult can help you to learn about the business world, the future, and yourself.