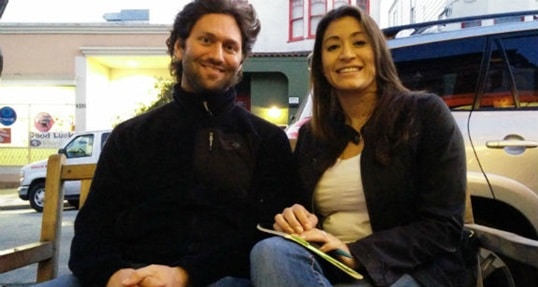 The assignment was simple: Write a paper on how you would change the world without any limitations.

It was part of Master of Social Entrepreneurship student Erika Barraza’s Global Crisis class last fall. After some thought, Barraza wrote her paper on changing the world through empathetic behavior. Little did she know that a few short months later, she’d be doing just that.

Barraza is co-founder of the Homeless GoPro project, an initiative that shares insight into the lives of the San Francisco homeless via first-person video – putting what she’s learning in the classroom to work months before graduation.

The Homeless GoPro volunteer team is using the power of technology to increase understanding for the less fortunate in the area.

“It’s not a business, it’s not a startup; it’s a movement,” Barraza explains. “We want people to have this conversation about empathy, and technology is the best way to begin to engage in the conversation. We want to build empathy and increase the community’s ability to see what others are experiencing.”

Homeless GoPro had its online launch on Monday, April 14. A corresponding San Francisco Chronicle article set off a local media storm, and the impact is already reaching the streets. Homeless volunteer Adam Reichart, the initial subject of the Homeless GoPro films, has become somewhat of a San Francisco hero thanks to his footage. He has made $350 in donations on the street this week. But more importantly, the humanity is increasing, Barraza says. People are talking to Reichart, not just dismissing him, and connecting with him “like a neighbor.”

A Bay Area native, Barraza has generally felt indifferent to the homeless people in the local cities. But after leaving a NetImpact conference in San Jose last winter and watching local students ignore a homeless group, she says she had an “ah-ha moment” – and realized that while the homeless problem may be prevalent, it’s not normal.

Not long after that, as Barraza was applying for a fellowship with IDEO, she saw what she called a “wouldn’t it be nice?” post from a fellow applicant named Kevin Adler about documenting the lives of homeless people to share their stories with others and generate compassion. Barraza was ready to put that idea in motion, thanks to her project management experience. She reached out to Adler, whose passion for the project stems from his personal connection to the homeless; he had a homeless uncle growing up. The pair met, talked their idea over, and Homeless GoPro was born.

The team recruited a couple more volunteers, including Reichart, who they met via HandUp, an organization facilitating online donations to help the homeless in the Bay Area. With a donated camera from a GoPro employee, they started filming Reichart’s everyday activities in January.

Since then, Barraza, Adler and Reichart, who lives in the Castro, have been filming two-hour segments together. Reichart wears the GoPro around his neck and goes about his day, talking with strangers, selling the Street Sheet, a homeless-focused newspaper, and meandering through the Castro.  Segments include his personal stories and commentary on the homeless problem in San Francisco. The videos are edited into short segments by volunteer videographers, including Hult San Francisco alum Karl Teien, who Barraza met through the close-knit social entrepreneurship community in the Bay Area.

Homeless GoPro’s goals right now are simple: start the conversation about empathy toward the homeless, and get Reichart off the streets. The bigger picture includes expanding the project throughout San Francisco, then nationally and even internationally. Barraza will rely on her international classmates at Hult to help her do this.

“We have such a strong support network among ourselves,” Barraza says of her classmates and professors. “I’ve enjoyed having my classmates’ international perspective, and [through them] can organize partnerships on a global scale.”

The last few days since the launch of Homeless GoPro have been a bit chaotic, particularly with the media inquiries the team has been receiving. NPR, Huffington Post, and KQED reached out, and then national affiliates and the U.K.’s Daily Mail. The international exposure has helped Barraza make plans to meet up with interested volunteers in Europe when she spends a summer term at Hult’s London campus.

Barraza is working hard to balance classes, school work, and Homeless GoPro, plus an active membership in the SoBiz social entrepreneurship student club, an upcoming internship, and a social life. She’s also starting to put plans in place to start her own business after graduation. The support and understanding of her equally busy classmates is helping to get her through – and keeping her humble, she says affectionately.

Although she didn’t know what to expect with the launch this week, she is truly happy to see her project come to fruition, especially as she recognizes the importance about knowing what you’re good at and what drives you.

“I’m staying true to what I want to be doing,” she says. “If you make decisions that way, then these things can happen.”

Hult offers a range of highly skills-focused and employability-driven business school programs including a range of MBA options and a comprehensive one year Masters in International Business. To find out more, take a look at our blog Why going to business school in 2019 is a resolution you should keep. Download a brochure or get in touch today to find out how Hult can help you to learn about the business world, the future, and yourself.

How going beyond business at Hult helped me launch my company