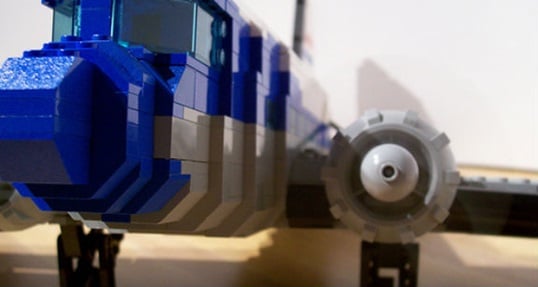 Visualize This: Spatial Reasoning Skills Matter More Than Ever

The aircraft in the picture is probably unlike anything you’ve ever seen. In fact, it looks like it’s straight out of Star Wars. Its wings are blue, the main body is white, and its been designed to cut down on fuel consumption through a hybrid engine that combines hydrogen and turboelectric power. Yet the most amazing part of all? It’s made entirely of LEGOs.

The second most amazing part of this design, aptly named the “Hydrogen Powered Regional Airliner,” is that it was designed by 13-year-old Claes Sundstrom, who took first place at NASA’s “Future Missions: Imagine and Build” contest earlier last month. Sundstrom’s win earned him a trophy, NASA souvenirs—and bragging rights for life.

So what’s at the heart of the ability to design an aircraft with tiny plastic bricks that in theory could also actually function in the skies? One might say it’s sheer genius, but it’s actually called spatial reasoning. Writer Annie Murphy Paul describes it as “the ability to mentally manipulate shapes and otherwise understand how the three-dimensional world works.” It’s a critical skill for a wide range of occupations—from mathematics and engineering, to design and sculpture. But it’s rarely given the attention many educators and experts believe it deserves—at least not in the traditional classroom environment.

Educators, experts, scientists, etc., have all sorts of ideas on why spatial reasoning skills haven’t received the same curricular attention as math and verbal skills, which we’ll get into in a minute. But one of the more intriguing theories, proposed by Kirk Goldsberry in his article “The Importance of Spatial Thinking Now,” posits that when Harvard University shuttered its Geography Department in the 1940s, many (but not all) universities elected to dissolve their programs as well. The effect, he believes, has been profound.

“We are paying for a prolonged lack of spatial thinking […] There are too few classes that enable learners to improve their spatial reasoning abilities, with maps and visualizations being of course the most central artifacts to such improvements. […] Not enough people know how to make maps or handle spatial data sets.”

Why is this so important now? Because of this: we don’t rely on mere words alone to communicate and disseminate data anymore (we probably never really did), and the phenomena of big data has made its counterpart, data visualization, increasingly critical in helping to “visually decode” an overwhelming amount of information. Charts, infographics, 3-D graphics—even animation shorts—are harnessed more than ever to translate large, chunky, convoluted data into easily digestible, bite-sized bits.

You see, our brains really like pictures—and we learn a lot faster when they’re paired with data. Typically, we are likely to remember only about 10% of information three days after we’ve first absorbed it. But that retention rate skyrockets to 65% when you throw a picture (or more) in the mix. This concept is—no surprise—known as the picture superiority effect. Check out a few of former New York Times’ reporter Megan Jaegerman’s infographics, and see if you don’t walk away with new, quickly ingested knowledge on a topic you didn’t know much about before.

But for every great design, there are far more bad ones. So how come schools aren’t stepping up to the plate to help students hone their spatial reasoning skills so they have the ability to not only visualize, but also communicate, data more effectively?

Forbes writer Alex Knapp, opines in his article “Why Schools Don’t Value Spatial Reasoning,” that spatial reasoning is harder to test and teach than the traditional triumvirate of “reading, writing, and ‘rithmetic”. Just consider the Scholastic Aptitude Test (SAT), he says, and what it measures: quantitative and verbal skills. There is no spatial reasoning section. (There is a test, the Differential Aptitude Test, which can measure those skills.) But here’s the thing: it’s possible—just like you might be better at math than reading comprehension—you also might be exceptionally good at spatial reasoning and never know it because you’ve never been tested for it. In fact, it’s sometimes known as the “orphan ability.”

So it makes sense that with data visualization emerging as a critical area of study in its own right, according to Goldsberry, spatial reasoning skills have become more important than ever: “data visualization is an emerging, important discipline, and spatial thinking—geography—is a fundamental skill for good data visualization.” Does this mean that because students aren’t exposed to geography in school (many, anyway), there’s an army of students and graduates walking around with stunted spatial reasoning abilities? Surprisingly and fortunately, the answer is no. Why? Because guess what else helps build those skills? Video games. That’s right. In our next post we’ll talk about newly emerged research, and why writer Annie Murphy Paul has made the declaration that “girls should play video games”. Ah, the virtues of Grand Theft Auto V. Stay tuned.

Hult offers a range of highly skills-focused and employability-driven business school programs including a range of MBA options and a comprehensive one year Masters in International Business. To find out more, take a look at our blog Choosing your school: Is it time to get out of your comfort zone?. Download a brochure or get in touch today to find out how Hult can help you to learn about the business world, the future, and yourself.