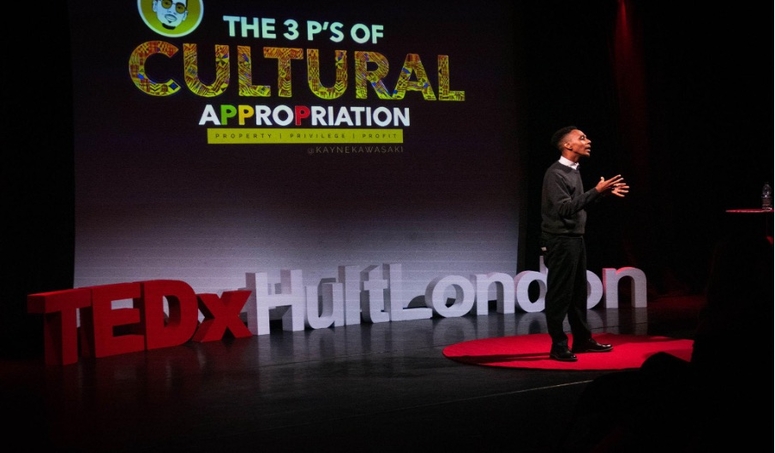 Curiosity. Get Out of Your Comfort Zone. Be Kind to Yourself.

These were the three phrases used at the opening of Never Settle, TEDxHultLondon’s first-ever hybrid event on March 20, 2022. The location: Rich Mix in London; the destination: enlightenment. 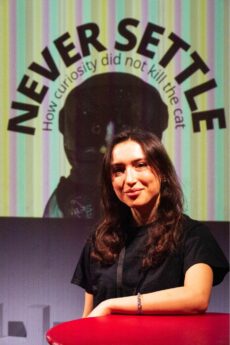 The opening featured a close friend of mine, and an exceptional leader, Leopold Gaebler, who is the president of TEDxHultLondon. He spoke about the ethos of the event: to never settle for less, continuously improve and develop oneself, and to feed one’s curiosity.

After the opening speech, and just before we listened to our first speaker of the day, we watched Adam Grant’s TED talk about the Power of Procrastination. For someone like me, who strives to get things done way before a deadline, it is fascinating to know that leaving things to the last minute may lead to creative insights and solutions one may not have thought of otherwise. He cited examples such as Martin Luther King who revised his I have a dream speech up until the very last minute before he presented it. He spoke of the difference between self-doubt and idea-doubt and the importance of never doubting oneself. 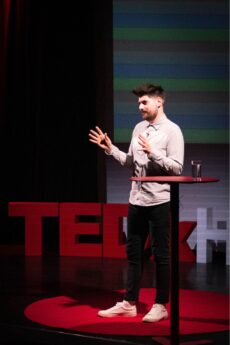 Chris is the author of Discovery of Less, a leadership coach at NatWest Group, a career mentor, and a professional minimalist. His topic was “Less Busy, More Impact” which was all about how to apply a minimalist point of view to one’s life. He told the story of how he went from decluttering his home after stepping on a CD case and cutting his foot, to selling off his belongings, his home, leaving his job, and going traveling. He left behind excesses and negative thoughts and subscribed to voluntary simplicity. When he eventually went back to work and got another house, he quickly experienced what most white-collar professionals do: being busy. Meetings, emails, “urgent” tasks. Then, an interesting experience changed his perspective once again. One day, he had the “urgent” task of creating a spreadsheet for his boss. He was anxious and scared, like a child who was afraid of getting called out for not doing their homework. But nothing happened. The task was forgotten. It was not important at all.

We have become addicted to being busy.

The lessons he learned from experiences like this were to turn off your email during the day, check to see if other people can do the task they are asking you to do, and avoid the “to-do list treadmill”. For many people, being busy is the goal. We have become addicted to being busy. He cited studies conducted by the University of Virginia and the Journal of Psychology which found that minimalism can lead to greater happiness and wellbeing, and that 60% of our time is wasted on unproductive meetings and emails. Chris concluded that we need to be less busy, and more impactful.

Speaker 2: Megan Reitz: How to Lead in an Age of Employee Activism? 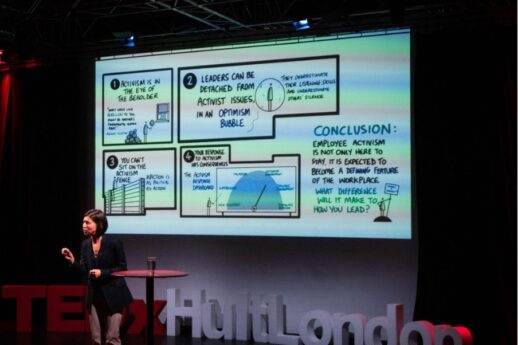 Dr. Megan Reitz is a Professor of Leadership and Dialogue at Hult Ashridge Executive Education and the director and founder of Reitz Consulting. She has authored three books: Mind Time, Dialogue in Organisations, and Speak Up, and was listed on the Thinkers50 ranking of global management thinkers.

“Speak up!” she shouted as she opened her talk. “Bring your whole self to work!”  “Be the change you want to see!” These were some of the things she says organizations say on a regular basis. But, actions speak louder than words, right?

Her talk was about employee activism and how it has become a loaded term over the years. Some associate the word with heroism, others with a threat to one’s life and livelihood. And how activism is in the eye of the beholder.

She goes on to teach us the lessons she found from the research she conducted with John Higins. She outlined four key findings

Speaker 3: Anthony Gordon, What If? 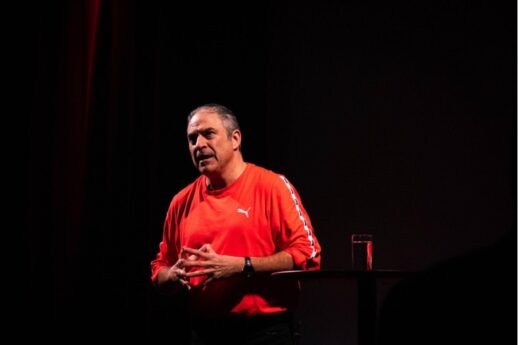 Anthony Gordon traveled from Los Angeles to London just to be here for the talk. He hosts the Anthony Gordon Show – Lessons 4 Life I Did Not Learn at Harvard, he is a best-selling author, managing director, CEO, and all-around amazing person.

His talk was about a single change for a happy life. It was focused on the contemporary consumption of happiness and pain and how we confuse the absence of pain with happiness. He starts by making a bold statement about how most insights about life are untrue.

Anthony grew up in South Africa and is from a modest background. He got accepted into Harvard Business School and graduated from Harvard with really good grades. We tend to believe if we live our life according to a script, it goes according to that script. However, his story took a drastically different turn when he got a call from his doctor at 24 years old saying he had lung cancer. He made a promise to God at that moment that if he were to survive he would dedicate his life to helping others to escape popular culturism.

He went on to explain that millions of people have started to believe that short-term pleasure equates to long-term happiness. The entertainment industry and corporations tell us what we should like, dislike, become, and what life means (think of MTV and the fast-food industry). The technique behind it is the “truth effect”: the more times something is repeated, the greater a chance that people believe it is the truth and not opinion. By watching the same messages on TV, listening to them in music, and even talking about them with friends, people get stuck in a downward spiral of believing what they’re told.

Anthony explained that happiness does not equal funds. Fun is transient. And the opposite of pain is not fun or pleasure. The opposite of pain is painless. He urged us not to wait until the pain subsides before doing what we truly want to do and go after what is true success to us. Strength comes from discomfort, and although there are many uncertainties in life, the middle letters of “life” is “if”. “What if?” is a question we all must answer throughout our life.

He ended with a quote:

We are not meant to wait for the storm to pass, but to dance in the rain.

Speaker 4: Anna Buldakova, What Do You Want to Be When You Grow Up? 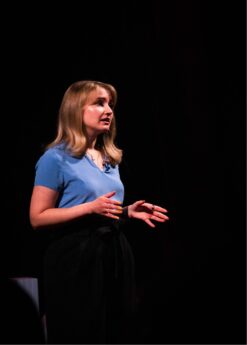 Anna Buldakova is the CEO of Vektor AI and a former product lead at Facebook. However, when she was young she wanted to be an ice cream salesperson.

But, she realized, there was a problem: she was not going to make a lot of money being an ice cream woman. So, she faced a conflict many of us deal with: either we pick a career that pays well or we pick what we love. We can have both if we become the top 1% in our field.

However, this trade-off may not hold true in our day and age. Think of people who make a decent living from playing video games, live streaming videos on social media, and turning their passion into income streams.

Anna went on to explain how society has changed over the years. In the past, without digital and communication technologies, communities could produce and sell only within small groups and in small quantities. However, with the advent of these innovations, a person can now scale their operations beyond borders. She cited statistics about the changing future of work. By 2025, there will be a 50/50 split between tasks completed by humans and AI. 60% of the working population will need reskilling to meet this new age. Hence, she concludes that it is imperative for us to build our careers around our strengths and interests, and not goals.

It is imperative for us to build our careers around our strengths and interests, and not goals.

Anna shared three lessons learned from her career in tech:

First, start small and experiment. When she said this, my mind went to the Lean Startup concept. Start with an MVP and take part in rapid experimentation and improvement of one’s product. YouTube started as a dating app; Slack as a video game platform. The first product does not need to be the end product.

Finally,  monetize your uniqueness. We buy things because they are different. If we had two products which were the exact same, we would not spend more on one over the other. Hence, we need to take a different path to success and find out what is truly unique about ourselves. 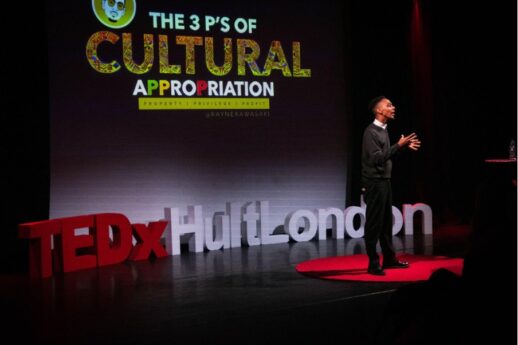 Just like Anna Buldakova, Kayne was also asked what he wanted to be when he grew up. He knew he wanted to become either two things: a teacher or a preacher. He fulfilled his dream of the first, then the pandemic hit, and an opportunity came his way. He started spending his newfound free time on social media, not aimlessly scrolling through feeds, but educating the masses about UK Black history, Black culture, and advocating for Black people’s rights. He was successful enough to quit his job and become a full-time influencer and commentator.

Cultural Property, he explained is not about ownership, but about culture. How certain elements are often identified with a specific culture, for example, dreadlocks, and how dreadlocks are symbolic of religious belief in some cultures. However, unfortunately, this may not be recognized or empathized with. In the UK, Chikayzea Flanders was banned from Fulham Boys School after he was told to cut his dreadlocks or face suspension—cut off from his friends and school community because of his beliefs.

Cultural Privilege, Kanye explained, comes with responsibility. “With great power comes great responsibility”—most of us have heard the phrase from Spider Man—is a message to dominant cultural groups to understand their privilege and the effects their actions may have on a minority cultural group.

Cultural Profit is making money off of cultural appropriation. Kanye cited the example of Louis Viton who sold a 995 GPB menswear shirt called the Jamaican Stripe Jumper which featured the wrong colors of the Jamaican flag. There was a lot of backlash, but the question remains: should it be ok for corporations to abuse their cultural privilege and make money from a minority cultural group’s cultural property without fair compensation? Another good question is: how is it possible that the wrong colors got through in the first place? Perhaps, this is a sign of the lack of representation of ethnic minorities in decision-making positions in corporations.

What This Event Meant to Me 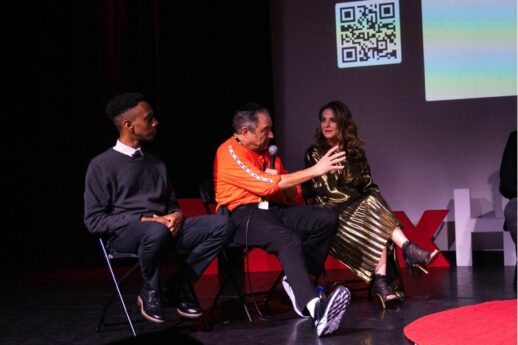 One thing I am grateful for is having a burning question of mine answered: How to balance work and life when seeking to achieve my goals? The answer: focus on work-life integration, there is no work-life balance, only priorities. If I focus on working more meaningful hours, then I do not need to trade off the two.

There is no work-life balance, only priorities.

One thing that makes every TEDxHultLondon event successful is the people involved. There isn’t a single member of TEDxHultLondon who is not inspiring, dedicated, and all-around incredible. From the board to the members, They all deserve recognition for their efforts, and hopefully, they will continue to lead Hult into the future.

The event was truly inspiring and I am grateful I got the opportunity to go. It is events like this, which make me glad I made the decision to come to Hult. I cannot wait for the next one.

Check out what in-person and online events Hult has coming up. 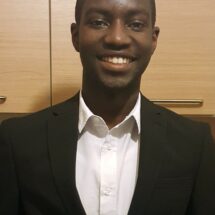 George Arthur Nying is British Gambian and started Hult’s Bachelor of Business Administration program in 2020. He’s got a positive personality and eager to try new things. George is President of the Trading and Investing Club at Hult, a member of the African, Business, and Cultural Society, and one of our Blog Ambassadors. He’s also proud to be awarded the Hult Scholar Grant. In his free time, he loves to read non-fiction books and biographies.

What’s it like to go to university in London?