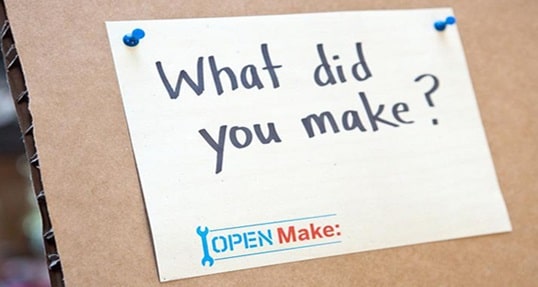 An Overview of the Maker Movement – What is It, and Why Now? [Part 2]

“I do not think that there is any thrill that can go through the human heart like that felt by the inventor as he sees some creation of his brain unfolding to success…such emotions make a man forget food, sleep, friends, love, everything.” – Nikolai Tesla

In part one of the Maker Movement overview, we took a close look at the first driver of the movement, access to global markets. Now, let’s take a look at the remaining three, as we begin to break down why the movement has become a global business phenomena.

2. Proliferation of cheap, powerful, easy to use tools

For people designing physical products, the prices of the tools of the trade have fallen profoundly. When I was an engineering student (back in the day), 3D CAD software was priced as high as $50K per license. Today, open source 3D CAD software is freely available. Companies like Autodesk have made their software very affordable for micro-entrepreneurs and engineer-designers, but it’s not the only.

GrabCAD enables mechanical system designers to source 3D models of key components that serve as the foundation of their systems, all from a global community of designers. What does this mean exactly? It means that engineers can tap into a network of fellow designers in order to build their products faster than ever before.

Until now, software had been one of the largest barriers to using 3D printers. That is no longer the case. Designers can use Adobe software to design 3D models, and then send them to a local 3D printer—or an online 3D printer with outsourcing capability. Recently, the company announced that it will also integrate 3D printing in Photoshop CC.

In my day, 3D printers cost many hundreds of thousands to over a million dollars, limiting their use to a select few. Just a few years ago, 3D printers became mainstream (you can now buy one at Staples). And this year, on the exhibit floor of the International Consumer Electronics Show in Las Vegas, for the first time ever, a section of the exhibit hall was entirely dedicated to 3D printers. Leading 3D printer producers include open system pioneer MakerBot, now part of Statasys, and 3D Systems and RoBo3D. Or, perhaps there’s something you want to scan before printing? Matterform has created a 3D scanner, making it easy to replicate objects by scanning and printing them.

But designers, engineers, and makers of all kind don’t need a printer if they don’t really want one. Companies like CloudFab allow makers to upload their designs into the cloud, which links them to an ecosystem of hundreds of global 3D printing companies that specialize in a wide range of products and materials. Designers can choose the company through which they’d like to print by searching for their ideal vendor mix of experience and quality.

Some ventures offer more than just tools. Shapeways “helps make and sell things,” from really small items (think a ring), to larger ones (try a chair), with more than 30 material options. The company essentially serves as a one-stop shop: it offers 3D software for designing, the hardware needed to print designs, and a virtual store through which to sell items. To date, it has printed more than 1,000,000 products, and serves 10,000 independently run shops. Quirky (“products invented by real people”) provides similar capabilities to inventors in the consumer products space, matching their inventions with category subject matter experts and specialists in market research, manufacturing and sales.

There are two challenges that makers face as they begin the creation process: a physical place in which to build, and a “coach” of sorts to help them through what can be a complex process. TechShop helps to solve both of these problems by providing maker space on a national level, thereby facilitating maker communities where knowledge distribution and transfers can easily take place.

There are also countless community-centric maker spaces like the Artisan’s Asylum in Somerville, Massachusetts. The non-profit organization furnishes education, tools, and workspaces to empower hobbyists, artists, and early stage entrepreneurs, to create on large or small scales. The organization’s goal? To help make the world a place where sincere, creative individuals are able to give form to their ideas.

Betaspring, a mentorship-driven start up accelerator, was named this year among the top 15 start-up accelerators in the world. It has the distinction of having “accelerated” more hardware/physical technology companies than any other accelerator in America. (Disclosure: I serve as a mentor at Betaspring.) A year ago they began building on their increasing momentum by expanding their program, and adding new resources, including a “Maker-in-Residence,” “Maker Fellow Program,” and a small maker shop onsite in collaboration with Inventables, which offers a “Designers Hardware Store,” giving easier access to individuals and small teams seeking to source materials for reasonable prices.

Crowdfunding has been a huge catalyst in the surge of the Maker Movement. Instead of seeking one, or a handful of funders, makers now have access to many, many more, thanks to the Internet.

Kickstarter, a crowdfunding platform, recently celebrated a significant milestone: it provided its billionth dollar of funding. Many companies that have received funding through it—and the myriad of other crowdfunding sites—are also categorized as makers. Some Kickstarter beneficiaries includes Gustin, the San Francisco-based maker of high-end Selvedge Denim, as well as Pebble, the “smartwatch” maker, and OUYA, the multi-platform console that can play games developed for Xbox, Sony Play Station, Wii and Nintendo on a single console.

In 2013, there were a record 31 Consumer Electronics Hardware funding deals, with over $900M USD invested in devices such as the GoPro Extreme-Sports camera, the Nest Thermostat, and the Roku streaming media player. This is double the approximately $450M invested in this category in 2012, and there are early signs of even higher growth in 2014.

All this signals that the Maker Movement is moving full speed ahead to revolutionize business, as we know it. In fact, some argue it already has. In my experience, and I’ve got just a bit, I’ve never witnessed a time as exciting as this one in which anything is possible. The number of global resources, and the technology that provides easy access, is empowering innovators of all types to nurture their ideas into reality. You could even say that all of us, on some level, are makers. But this also means that we all have a greater stake—and responsibility—in supporting sustainable innovation efforts that will make the world a better place for generations of makers to come.

Make the most of what your career has to offer with a Masters in International Business from Hult. To learn more, take a look at our blog 7 steps to working out what you want and how to get it, or give your employability a huge boost with an MBA in international business. Download a brochure or get in touch today to find out how Hult can help you to explore everything about the business world, the future, and yourself.