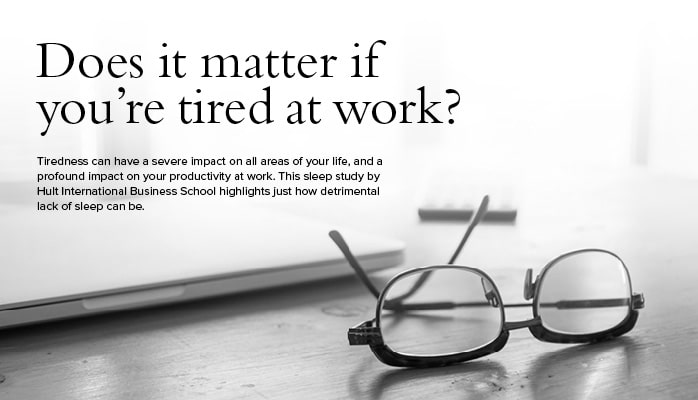 Professor Culpin and her team monitored the sleep behavior of individuals in organizations of different size and sectors. Based on a survey of over 1,000 professionals at all levels, the researchers examined the impact of sleep on workplace performance. The research findings are outlined in a recent report, The Wake-up Call: The importance of sleep in organizational life.

These findings suggest that lack of sleep can fundamentally hinder managers’ ability to perform at their peak and lead to other damaging physical and emotional side effects.

Along with Professor Culpin’s findings, mounting evidence suggests that the effects of sleep deprivation are a “hidden threat” that organizations need to pay attention to if they want to ensure the well-being of their staff while also gaining a competitive edge.

So, what are the ways a sleep deficit might impact you and your work?

According to the American Academy of Sleep Medicine, healthy adults should get a minimum of seven hours of sleep each night, with a recommended range of between seven to eight hours. However, Hult’s research revealed that the professionals surveyed averaged only six hours and 28 minutes.

While an extra 30 minutes of shut-eye might not seem like much, the effects of this sleep deficit were notable. Many survey respondents reported poorer workplace performance due to tiredness, with over half admitting to struggling to stay focused in meetings, taking longer to complete tasks, and finding it challenging to generate new ideas. Along with a lack of focus and diminished creative capacities, participants also indicated a reduced motivation to learn and be less able to manage competing demands.

“It is common for managers and colleagues to look at a lack of focus or motivation, irritability, and bad decision making as being caused by poor training, organizational politics or the work environment. The answer could be much simpler – a lack of sleep.”

From The Wake-up Call: The importance of sleep in organizational life

The cumulative effect of this sleep deficit seems to be contributing to a less productive workforce. According to the National Sleep Foundation, professionals spend an average of 4.5 hours doing work at home each week, suggesting this could represent a cycle whereby workers are less productive during business hours because they’re tired, and so they have to bring work home, to the continued detriment of their sleep.

The physical effects of tiredness can be significant. A general feeling of lethargy is a standard symptom of poor sleep, while a number of participants in Hult’s research also reported experiencing other adverse physical symptoms, such as heartburn and palpitations.

This supports numerous established studies showing a connection between the quality of sleep and quality of physical health. A decreased immune function can make you more susceptible to common illnesses, which in turn can keep you away from the office and potentially damage your career. According to one study, people who averaged less than seven hours of sleep were nearly three times more likely to develop a cold.

More troubling however are the potential long-term effects of sleep deprivation. The risk of serious medical conditions such as obesity, heart disease, and diabetes, have all been linked to chronic lack of sleep.

What would happen if you didn’t sleep? Watch the video:

Lack of sleep also has a profound impact on your feelings and mood. Some of the more dramatic psychological effects of sleeplessness include paranoia, hallucinations, mania, and memory loss — all of which would prove hugely detrimental on the job.

But even more subtle effects of poor sleep can prove challenging in an organizational environment. Teamwork and communication play a big role in corporate environments and are vital to professional success. A significant number of survey respondents in Hult’s sleep-related research found the interpersonal aspects of their role especially difficult when tired.

The frayed nerves, moodiness, and lack of focus associated with a sleep deficit can put a big strain on the key social relationships fostered in the workplace. An overwhelming 84% of those surveyed felt more irritable as a result of poor sleep, and well over half of the respondents reported experiencing higher levels of stress, anxiety, and feelings of frustration. Additionally, feelings of withdrawal and a lack of optimism about the future were also frequently cited, further supporting the relationship between poor sleep and poor mental health.

4. Lack of sleep has potentially dangerous or disastrous outcomes

Along with the emotional impact, sleep deprivation can take a toll on your cognitive abilities including perception, judgment, reaction time, and decision making.

In fact, seventeen hours of sustained wakefulness, such as a long day in the office, has been shown to result in behavioral changes equivalent to drinking two glasses of wine. If wakefulness continues for 24 hours, you may act as if you have drunk four glasses of wine. Diminished cognitive performance can have huge repercussions for professionals whose jobs demand critical attention to detail, such as surgeons, pilots, and drivers.

It has become unfortunately evident that the effects of a sleep-deprived workforce can be disastrous. The Three Mile Island nuclear meltdown, the Chernobyl nuclear explosion, the Exxon Valdez oil spill, and the Challenger space shuttle disaster were all the result of human error caused by sleepiness.

Whether it’s improving workplace productivity or averting large-scale disasters, better sleep is clearly better for business. Find out more about what impact lack of sleep might have on you and your organization, along with ways you can promote healthier sleeping habits, in the infographic below.

Fill in your details to get the full report

Make the most of what your career has to offer with a Masters in International Business from Hult. To learn more, take a look at our blog Winter Olympics: The power of mentors on performance, or give your employability a huge boost with an MBA in international business. Download a brochure or get in touch today to find out how Hult can help you to explore everything about the business world, the future, and yourself.

Improve your executive decision-making with these economics-based strategies

From rhetoric to action in DEIB

Critical Thinking: What it is and how to master it

Everything You Need to Know About Clubhouse

Mind the gap! Fintech vs. the desired skillset of employees in finance & accounting

Responsible leadership and its role in business