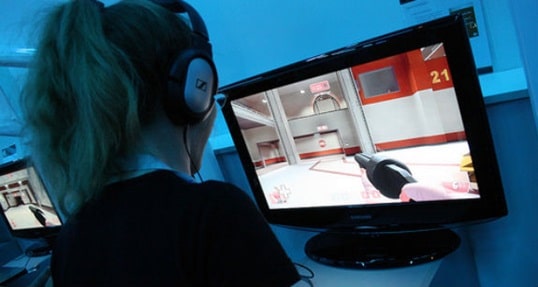 Conventional wisdom: sometimes it’s good stuff and sometimes it falls a bit short. For centuries, popular opinion had it that the Earth was at the center of the solar system. That one fell a bit short. On the other hand, conventional wisdom dictates that a diet rich in vegetables and low in fat will promote better health. That one seems to hold water. But when the first generation of video games came out, so too was born the perception that they are bad news for the brain, promote laziness, and dull the senses. Conventional wisdom completely missed the boat on that one, and we’re here not only to clear the good name of video games, but also to extol their virtues.

For years, video games were the scourge of parents and teachers everywhere. They didn’t appear to improve players’ lives in any productive way—so the thinking went—like getting some exercise, drinking plenty of water, or reading anything from the 100 Best Novels of All Time list. There is a formula for succeeding in school—so this thinking went—that consists of doing homework (well), studying for tests (and scoring well), and participating in extracurricular activities (at least somewhat well). If students neglect any of the above in favor of a few hours with a game console, then this current (yet wrong) thinking decrees that students are hurting their chances of doing well in school—and that means in life.

But little do people know that when kids and teens (even grownups) play video games, they’re actually helping themselves to develop parts of their brains that give them an edge to do well in school—and in life. It just took a trickle of research to convince a growing number of experts that video games are in fact good for students’ brains. Perhaps a steady stream of it will convince everyone else!

This is what we know now, thanks to neuroscientists, psychologists and others who have contributed to this growing body of research: video games help us develop our spatial reasoning, which is the ability to mentally move around shapes, visualize their patterns, and keenly understand a world in 3D. We all utilize this ability, perhaps more than we realize. We use it for mundane tasks such as organizing boxes in a moving van, packing a suitcase, or mapping out a route for a road trip. But we also use it for more complex ones, such as rendering the design plans for buildings, bridges, or airplanes. Of course, some people have more developed spatial reasoning than others. However, just like we can learn to improve our bowling game, to increase our foreign language skills, or to finally beat our toughest competitor in Words with Friends, it’s something at which we can all get better at with time and practice.

In our last post, we talked about the importance of why spatial reasoning hasn’t been given the same formal education attention as other subjects (think math and verbal skills) for a variety of reasons. (Some of those are more like theories, but convincing nonetheless.) Until the time that it is given more attention in school and made a higher priority, video games offer a very direct (and fun) way to hone one’s spatial reasoning ability.

Before you go with the conventional thinking that video games are the sole purview of dudes, we’d like to point out that 45% of gamers are female (booya!). That’s why we agree with Annie Murphy Paul’s assertion in her article that “Girls Should Play More Video Games.” Here’s why it’s a really good idea to encourage younger girls to pick up gaming: highly technical fields like computer science and engineering (and many more) have a dearth of women. This means that somewhere somewhere along the way in school, girls are jumping off the “STEM” (Science, Technology, Engineering and Mathematics) bandwagon. But this isn’t because girls have less spatial reasoning ability than boys, as some have long speculated.

New research, conducted by David Reilly and David Neumann of Griffith University in Australia, confirms what Psychologist Sharon Nash argued 30 years ago: “Gender-role identity can either promote or inhibit optimum development of cognitive ability in highly gender-typed domains, such as spatial and verbal ability. […] masculine identification leads to cultivation of spatial, mathematical, and scientific skills, whereas feminine identification facilitates verbal and language abilities.”

Annie Murphy Paul, in her aforementioned article, references another recent study from the University of Toronto that found that people who play an action-based video game “’can virtually eliminate’ the gender difference in a basic capacity they call spatial attention, while at the same time reducing the gender difference in the ability to mentally rotate objects, a higher-level spatial skill.” She concludes the following: “A meta-analysis of 217 research studies, published in Psychological Science last year, concluded that ‘spatial skills are malleable, durable and transferable,’ [and] can be improved by training; these improvements persist over time; and they ‘transfer’ to tasks that are different from the tasks used in the training.” This is, obviously, good news. Especially since Paul mentions that a mere 20-minute spatial training session can make a difference in the ability to solve math problems.

In these modern times, young ladies are not exactly dissuaded from gaming, but it also may not be an activity toward which they naturally gravitate. If they learn of the benefits to be had—and their parents and teachers know it, too—then they just might be persuaded to give it a try. And they just might get hooked. This is a good thing. Until schools jump on board to allot time for students to develop their spatial skills (we know video games are only one way to do so), it will have to be something they cultivate on their own time. And as more research pours in, it’s only a matter of time before an evening parent-child discussion might start out something like this: “Did you play your video games today?”

What will be the conventional wisdom then?