Home > Community > The Young and Disruptive 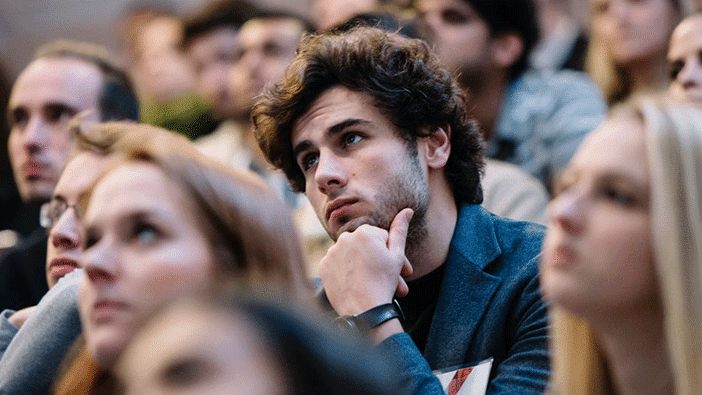 The Young and Disruptive

Contrary to the popular perception that the younger generation is only motivated by self-interest, the youngsters studying for both MIB and MBA degrees at Hult International Business School are self-aware and want to make the world a better place to live and work.

At the Day of Disruption held at Hult’s campus in Boston, I spoke to different groups of students and was pleasantly surprised that most of them have an extraordinary zeal for social entrepreneurship projects.

There were very few who said that they want to go into the market after completing their degree and just make money for themselves. One of the students from Columbia said that his family has seen some really tough days in the past, and he’d first try to change his family’s financial position and then will work toward social causes. He said: “Please don’t get me wrong, I want to do a lot for the society and especially for the communities I grew up in, but first I want to focus on my immediate family and then I’ll work to improve lives of people around me.”

An MBA student from Spain said that she feels very privileged to be studying at Hult in Boston, and she is working on several business ideas with her fellow students in Boston and her friends back home. When asked to describe her business ideas, she replied: “Of course, social entrepreneurship”.

Sipping coffee at Lingo restaurant on the ground floor of Hult’s Boston campus, along with four fellow students, all females, the Spaniard says the reasoning behind developing social business ideas is that she feels like giving back to society. The other students at the table agreed, and one of them was of the opinion that if the younger generation does not think about helping other people, then the future of this world won’t be beautiful. She says: ”The majority of my MIB classmates want to take up jobs and business projects that are socially relevant, and mind you these are not charity projects but rather for-profit business ideas.”

During my discussion with these five students at Hult, I realized that social innovation, which is at the heart of these young students, would send traditional business models for a toss.

Earlier social enterprises loosely meant charity and were run for non-profit, servicing communities and groups, but the new-age innovators and entrepreneurs are integrating social cause and for-profit business.It also seems the number of students who want to study in the United States and then return to their home countries to work is increasing. When I asked some students whether they’ll stay in the U.S. to pursue their careers, a sizeable number of MBA students said that they’d go back to where they came from.

Is the United States not attractive anymore? The answer is a partial yes. When it comes to social innovation, most of the students are of the view that there are a huge scope and need of social enterprises in emerging countries.

Armed with an American experience and global knowledge, most students want to bring constructive disruption in their countries and cities.

An MIB student identified a major game changer, saying the global digital connectivity has proved that geographical and political boundaries are almost meaningless. “Sitting in the comfort of my study room in Dubai, UAE, with a laptop or a smartphone, I am connected to the whole world. People do not have to be physically present to have a fruitful conversation or to have an exchange of ideas”, she said, adding that there are so many apps and social media platforms where one can seek expert advice or look for investors for innovative business projects.

Truth be told, some students also expressed concerned about the new administration at the White House. One Mexican MBA student remarked: “Despite the good American people, I am not comfortable with the policies of the new U.S. administration. I want to go back to my country to either work for an organization or start my own business,” he said.

After interacting with students at Hult, one can easily say that the new generation of managers would be socially aware of their surroundings, and wouldn’t hesitate a bit to change if something is not right. If this is a general indication of the digitally connected younger generation, the future of the world is in able hands.

*Names of students are protected at their request

Syed Atique Hussain is an MBA Candidate at Hult’s Boston campus. He has worked as a journalist in print, broadcast and digital media for 15 years in India, Saudi Arabia and the United Arab Emirates.

Like game changers? Break the mould in the business world with a Masters in Disruptive Innovation from Hult. To learn more, take a look at our blog The disruptive business model – the way forward for start-ups? or explore overall business challenges with a Masters in International Business instead. Download a brochure or get in touch today to find out how Hult can help you to find out everything about the business world, the future, and yourself.