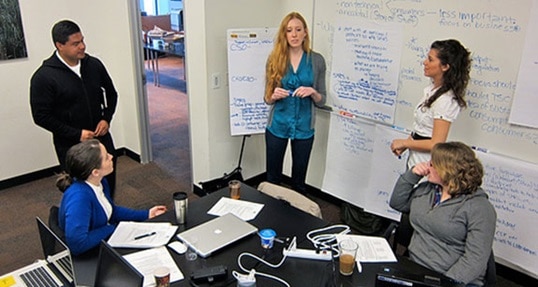 One consistent theme that keeps coming up in our research into what employers want from business school graduates is that people need to be able to work in teams in a productive way. This should come as no surprise given the increasingly networked and interdependent world in which we live.

I’ve also been talking with Hult students at the San Francisco campus who’ve shared with me some of the struggles they’ve had working in teams. Working on a team can be one of the most challenging parts of professional life, and perhaps even more so, the most challenging part of business school as well. In fact, in business school, it might be even more challenging – you’re often thrown into teams of people you barely know for short periods of time, and with whom you may not have anything in common.

In both business school and in life, there can be a lot of risk and very little reward in confronting a poorly performing team member. This causes many people to settle for less-than-ideal conditions when working in teams. This is unfortunate, because it means missing out on an opportunity to learn how to deal with some very valuable teamwork lessons that will keep reappearing later in your career.

As part of teaching at business schools around the world, whenever I’ve heard students complain about their teams, they usually say that their team would be great “if it wasn’t just for that one low-performing member.” I’ve heard numerous stories of the scapegoat team member who does at least one and sometimes many of the following:

There are two obvious points worth mentioning about these challenges. The first is that if you’re going to raise complaints about others, you need to be honest with yourself about your own performance. No one will take your complaints seriously if others see you as a low performer. The second is that members of teams that hold each other accountable for everyone’s performance usually perform better than teams that don’t. The challenge is to find ways to make a system of accountability work through the sharing of common goals, to put something of value at risk in the team’s success beyond just a grade, as well as know when to just move past an insurmountable obstacle.

In that spirit, I offer three potential ways to deal with a poorly performing team.

1. Good teams thrive on urgency. At the core of any successful team is the concept of “urgency,” or the shared desire to complete a task at a level of highest quality in order to add value to one’s organization and advance one’s personal career. But in business school, often the only reward for team projects (besides the knowledge gained in the class) is a good grade, which will be averaged into a GPA that will be meaningless within months. (Sorry, but it’s true.) So, before beginning the project, it might be useful to take an honest “urgency check” of everyone in the team about their feelings about the assignment – if urgency is low, don’t be surprised if challenges appear later.

One possible way to raise urgency of everyone on the team is to somehow make the assignment as relevant as possible to everyone’s common interests. There may not be much you can do about this given that professors usually don’t allow much customization in assignments, but it’s at least worth exploring what everyone believes they can get out of the assignment, and find ways to capture those shared goals and incorporate them into the project somehow. If everyone can state out loud at least one way that completing the project will make them actually excited to participate (not just “I’m only doing this because its required”), then sharing that information with each other can help raise the team’s urgency levels. Again, there may not be much you can do about the core nature of the assignment, but finding out what parts of the project get people motivated can be very helpful in raising urgency.

2. Put some skin in the game. A solution to the perennial challenge of holding team members accountable is to put something at stake based on the team’s success. If someone doesn’t cover their share of the work or delivers work at substandard levels, what may work is to create a self-enforcing accountability system that also helps create a team-bonding experience at the end of the project. When the project is finished, have everyone grade each other in secret on any factor the team chooses – from how much they contributed to the project to their attitude throughout the project to how much they helped others overcome obstacles related to the project.

Have an outside party that everyone trusts collect that information and hold it in confidence, but have that outside party report only who received the lowest average grade. That person has to do something generous for the others – buy the team dinner, dessert, coffee, or something else of the team’s choice. This doesn’t have to be seen as punitive – in fact, it can serve as a nice bonding experience where team members can share what they liked about working with each other and what they could do better next time.

3. At some point, you may just have to agree to disagree. The best teams often have honest disagreements about the preferred direction of a project before they finally settle on a solution. But sometimes these disagreements can drag on and on, robbing the team of valuable time and energy needed to complete the assignment. At some point, the best thing to happen is for one team member to step up and try to sideline the issue in such a way so that it doesn’t envelop the whole team. This is easier said than done, but if someone on the team can take the “facilitator” role to get people to “agree to disagree” about an issue and move on, then the whole team will be better served.

All of the above may seem like simple solutions to complex interpersonal challenges, and the devil will be in the details, but any of the above is better than just sitting back and accepting low performance from your team.

The most important thing to remember in all of this is that productive team skills are one of the most highly valued traits by employers. So being able to show that you used your business school experience to achieve high performance in teams, via creative solutions like the ones listed above, is one of the best ways to impress a future employer during an interview. Good luck with your team-based issues, and don’t give up!