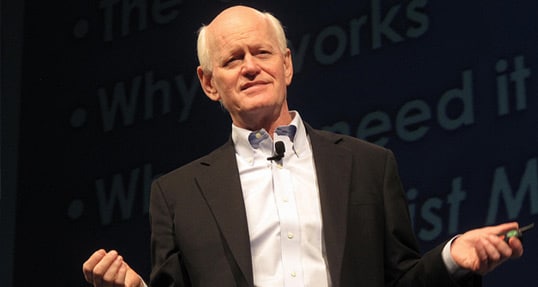 I am not a touchy feely person. I do not like telling total strangers my greatest flaws. Nor do I like sweeping generalisations about women – preached by a man.

You can imagine therefore my trepidation approaching the “Women in Leadership” lecture last week. Hosted by Hult International Business School, the brief was, well, brief. All I knew was I was attending a session with Marshall Goldsmith, apparently one of the world’s most sought-after CEO coaches.

Mr Goldsmith is one of those Americans who is not backward about coming forward. His introduction included a long list of the global heads of business he has single-handedly guided towards greatness: leaders of central banks, senior executives at Google, the top dog at Ford.

Rather than convincing me that this should be a compelling reason to listen to him, I am instead turned off. It is not, after all, very British to boast. Things do not improve with the announcement that this class – at which I was hoping to be purely an observer – will be interactive.

Immediately the coach gets us all to pair up with someone we have never met, and tell them our greatest flaw. The room is a prestigious mix of heads of recruitment at City firms, top business students and lecturers. Representatives from Barclays and Morgan McKenzie are on the table next to me. Everyone over the age of 25 looks awkward, terrified that next will come the order to “hug-it-out”. We mumble about not being good listeners, not taking criticism well, being over-competitive.

We are ordered to get up and tell as many people as possible in two minutes our greatest flaw and to offer one line of advice in return. The scene is more than a little reminiscent of an episode of The Office.

We learn that this is a much more effective way to give feedback – or feedforward as Mr Goldsmith prefers to call it. Rather than a one sided critique of a colleague, managerial advice should be short, two-way and given on an equal footing.

Mr Goldsmith tells us that as women we approach self-improvement with a long list of tasks to tackle. Men on the other hand tend to just pick one manageable flaw to eradicate. As a result the male task is achievable – having a positive impact across all fields. Woman instead struggle on with feelings of inadequacy – doomed to fail.

According to the Hult Business School, at the current rates of improvement women will still only account for less than 20pc of senior management in 10 years time. And the school want to accelerate this.

Men are three times more likely to ask for a pay rise than women. If a woman sees a task to be done in the office – as in life – she will add it to her load. Men will delegate.

His statements were peppered with Buddhist teachings.

He asks us to think of one person – “just one” – who frustrates us in the office.

“One day two Buddhist monks were returning to their monastery silently. Watching their thoughts, watching each step and witnessing everything. A small river used to flow close to their monastery. Coming to the river they saw a beautiful young lady crying.

“It was her wedding day, and she could not cross the river without ruining her bridal gown. The first monk said he was sorry, but as a member of a strict teaching he could not touch women and could not help. The other took pity on the young woman and carried her across the river.

“Walking back to the monastery the first monk chastised the second, telling him he had broken his religious vows. He continued to berate the second monk all evening. That night, the first monk was so angry he could not sleep, he woke the first monk saying ‘you are spoiled, you have carried the woman on your shoulders, its sin to touch a woman for a monk’.

“The second monk replied ‘I had dropped the woman at river bank only, but you are still carrying her in your head’.”

We are asked to think about that one infuriating individual, and are told that we only have ourselves to blame for our negative feelings. “Bet he’s not losing any sleep over you” Mr Goldsmith concludes.

As we listen the awkwardness dissipates. Nothing that Mr Goldsmith is saying is ground-breaking, but it contains some truth.

Then comes the most cringeworthy exercise. He asks us to put down pen and paper, and close our eyes.

To my absolute horror, I begin to cry.

Republished from the Telegraph, read the article in full here.

Grow your leadership capabilities with an MBA in international business at Hult. To learn more, take a look at our blog Being an influential woman: focus areas for female leaders, or give your career a boost with our Masters in International Business. Download a brochure or get in touch today to find out how Hult can help you to learn about the business world, the future, and yourself.