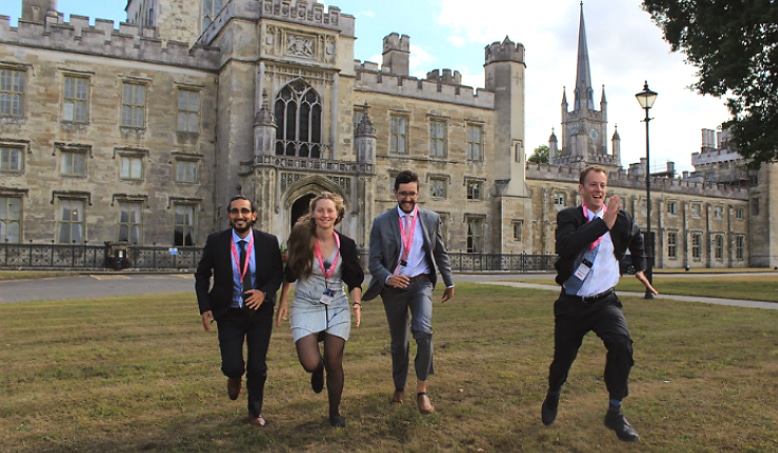 The Hult Prize Accelerator at Ashridge: Tomorrow’s changemakers take up the baton

This summer, over 150 student entrepreneurs arrived at Hult’s Ashridge campus for an intensive six-week accelerator program. Armed with ideas to change the world for the better, these ambitious students came from all over the globe to compete in the annual Hult Prize—the world’s biggest engine for the launch of social startups led by students.

Just over a week ago, the finalists were announced. Hailing from the International Islamic University Malaysia, the American University of Sharjah, the University of North Carolina at Chapel Hill, Oxford, University College London, and the University of Freiburg, six student teams are now on their way to New York to make their final pitches for the $1 million prize.

The ancestral home of game changers and thought leaders

It is particularly fitting that our historic Ashridge campus played host to this accelerator, bringing together the brightest young minds powering today’s most crucial social change. For over 700 years, Ashridge has been a center of learning and home to some of the most powerful thinkers and figures in society through the ages.

The first era of Ashridge: The power of the Church

The history of Ashridge can be traced back to 1283 and the establishment of a monastic order known as the College of Bonhommes.

Edmund, Earl of Cornwall, founded a monastery on the site to honor an invaluable holy relic he had purchased on his travels in Germany: a vial said to be containing the blood of Jesus Christ. This holy site soon became a renown place of pilgrimage.

Money raised from the donations of the visiting faithful allowed the order to purchase more land for the estate to grow, helping the monastery to flourish as a seat of learning and debate.

The second era: The power of the Crown

In the late 1530s, King Henry VIII dissolved all monastic orders in England as the sovereign broke away from the church in Rome.

Ashridge became the property of the Tudor king, and it was turned it into a royal residence and hunting lodge.

In 1550, he bequeathed Ashridge to his infant daughter, Princess Elizabeth, who would become Elizabeth I of England. Elizabeth spent part of her childhood at Ashridge and was arrested there by her sister Mary in 1554.

The third era: The power of the nobility

Following the death of Elizabeth I, Ashridge became a private residence. It was purchased by the Lord Chancellor, Thomas Egerton, who became the first Earl of Bridgewater.

The estate was passed down through generations as the seat of the Bridgewaters. In the early 19th century, Ashridge house was rebuilt in the gothic revival style, turning the impressive building into the castle as it’s known today.

It was thanks to the forward-thinking, industrious son of the fourth Earl that the wealth of the estate continued to grow. Known as the “Canal Duke,” he established the first of such modern waterways in Britain to transport goods during the industrial revolution.

The fourth era: The power of the politicians

Throughout the 19th and into the 20th century, the good and the great of the day were entertained at Ashridge House, including writers, diplomats, and the political elite.

In 1928, the house was purchased by a former Member of Parliament, Urban Hanlon Broughton, for use as a training center for the British Conservative Party. Broughton established the center in memory of the late statesman, Andrew Bonar Law.

As well as serving as a base of thought leadership for the party, the house briefly served as an emergency hospital during World War II.

The fifth era: The power of the executives

For over 50 years, executive education at Ashridge earned an international reputation for excellence, contributing to the success of thousands of business leaders and working with organizations like Unilever, Shell, and Guinness.

In 2015, Ashridge Business School operationally merged with Hult International Business School and continues to deliver future-focused training to the business leaders of today and tomorrow.

Today: The power of the social entrepreneurs

Ashridge has long been an advocate for the positive, transformative power of business in society. In fact, the Ashridge Centre for Business and Sustainability was established in 1993, making Ashridge one of the earliest authorities on the pressing sustainability issues that face business—and global society—today.

While continuing its cutting-edge research and training in the areas of leadership, sustainability, and corporate responsibility, it’s particularly appropriate that Ashridge is now the host of the Hult Prize Accelerator, providing a platform for the next wave of thinkers, social entrepreneurs, and game-changers in business and beyond.

By looking back over the centuries at Ashridge, it’s possible to trace the evolution of global thought leadership. Within its own history, we see the democratization of power, knowledge, and change—from the church and the crown to the wealthy, and—ultimately—from the politicians and business leaders to socially-minded young people from all corners of the globe.

Philip Auerswald, Chief Academic Officer of the Hult Prize, is gratefully acknowledged for the creative conception of this article.

To find out what happens at this year’s 2018 Hult Prize Finals in New York City, follow Hult International Business School and the Hult Prize Foundation on Facebook.

To learn how Hult takes students beyond business to shape tomorrow’s world, download a brochure.

Hult offers a range of highly skills-focused and employability-driven business school programs including a range of MBA options and a comprehensive one year Masters in International Business. To find out more, take a look at our blog Hult undergrads build their leadership skills: The Ashridge Cohort Experience. Download a brochure or get in touch today to find out how Hult can help you to learn about the business world, the future, and yourself.