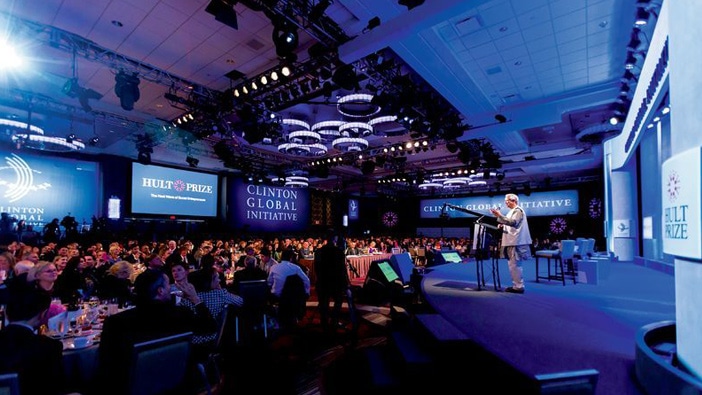 This article was originally published on March 4, 2015, by The Huffington Post, ‘The Nobel Prize for Students’.

Margaret Mead wrote that we should not doubt that a small group of thoughtful, committed citizens could change the world; indeed, she said, it’s the only thing that ever has. What if you could create a catalyst for those groups of people? Is there a way to re-frame the identities and careers of thousands of people to be more pro-social? That is exactly what the Hult Prize is. It is a gamified ecosystem for building the next wave of social entrepreneurs; a worldwide competition that annually attracts more than 10,000 students to try their hand at the world’s most pressing problems.

The founder of the Hult Prize, started this organization in 2009 and you can’t help but be awestruck by its success, with former U.S. President Bill Clinton and the Clinton Global Initiative as a partner, as well as the Hult International Business School. Every year, the global finals are hosted at the Clinton Global Initiative Annual Meeting in New York, where a winning team receives $1million USD in start-up capital to fund their venture.

What is so interesting about this competition is not that it selects one great team and gives them the network, reputation and resources necessary to grow into a powerful agent of change. The most exciting aspect is that it transforms and connects thousands of people from across the globe, every year. That is why Bill Clinton said in an interview with TIME Magazine that it is one of “the top five ideas that are changing the world for the better.”

The Hult Prize is a way to get to the very heart of the matter of making the world a better place. You have to start at the grassroots level. It all begins with our basic assumptions about what is possible, what is important, and what makes a meaningful undertaking. What Ahmad and his team have done is to build a platform for opening people’s eyes to new possibilities en masse.

They have also tapped into something much larger than themselves. No seed is better than the soil it is planted in, and the dream has clearly found fertile ground in which to spread. The collective consciousness of the millennial generation is yearning for new ways to challenge themselves and old paradigms.

The notion that institutions or the thinking that created them can’t solve old problems has seeped into the bedrock of our culture, and it is transforming us across the old political spectrum. The “Occupy” movement, the climate change movement, the Tea Party, the Greek party Syrzia, the Arab Spring and Podemos in Spain are all examples of this same change in perception.

What makes the Hult Prize, the Nobel Prize for students, stand out is that it is pragmatic and hands-on. It is not about setting new rules; it is about finding tangible ways to prove that new ways of thinking get results. That is the gift the CEO and the rest of his team is giving to thousands of people every year. How do you change the world? You prove that you can.

This post was produced by The Huffington Post and the Hult Prize Foundation Hult Prize@ program, in which teams of college and university entrepreneurs compete for funding for compelling social business ideas, including a grand prize of US$1,000,000. The posts are written by student campus directors of “Hult Prize@,” the program bringing the competition directly to campuses around the world. To learn more about the Hult Prize Foundation, please visit hultprize.org.

Hult offers a range of highly skills-focused and employability-driven business school programs including a range of MBA options and a comprehensive one year Masters in International Business. To find out more, take a look at our blog Hult joins Nobel Prize winner Muhammad Yunus to promote social business. Download a brochure or get in touch today to find out how Hult can help you to learn about the business world, the future, and yourself.