Home > Archive > The Case for Comic Books in the Classroom 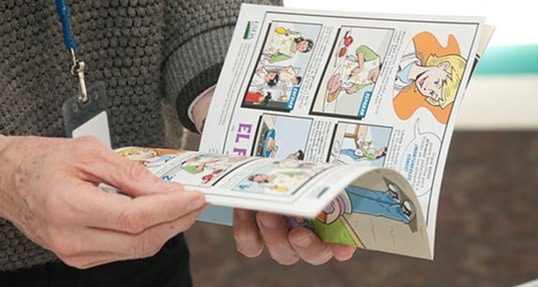 The Case for Comic Books in the Classroom

The room is dark. A gentleman sits behind a heavy desk, wearing a pinstriped suit. The red rose pinned to his lapel is a contrast to his imposing physique and ominous expression. A plume of smoke rises thickly from the cigar in his left hand.

He is known as Don Cummuta, and he is a mobster. He’s in the middle of a somber conversation with a serious-looking gentleman in a light-colored suit. He says to Don Cummuta: “Anyone can go to battle, but the height of wisdom is to win without a battle. War is costly. Even if you win, you lose. War costs lives, energy, money, and time.” His name is Sun Tzu.

The scene does not take place in 500 B.C., or in China. The setting is Chicago, 1927. Don Cummuta is losing control of his crime empire. He knows he needs to take decisive action, but needs help forming a strategy. With Sun Tzu at his right-hand, the citywide tensions threatening to erupt into violence may not end in bloodshed after all.

What happens next? Well, you’ll just have to read The Art of War – but not the version that may be sitting dustily on your bookshelf, or a well-worn copy from the library (either tangible or virtual). You’ll need the graphic novel version from SmarterComics, which has adapted iconic and original business books into graphic novel format.

Now, you’ll hear no argument from Hult Labs on the importance of reading original works. But comparing the two versions, there’s no question which one had a faster page-turn rate – the one with pictures.

The graphic novel features a time-traveling Sun Tzu who helps people tackle their predicaments in different vignettes around the world. The insights of the original version come to life on the page as he dispenses sage advice to the various characters. It’s entertaining and educational, and it’s no wonder students and teachers have taken notice.

Preliminary research has shown that comic books can be an effective and efficient learning tool for students at all levels. And this has a lot to do with the picture-superiority effect, a term Terry Childers and Michael Houston used to describe why certain brands “stick” in peoples’ minds over others. The stickiness, it turned out, had a lot to do with images. In their ground breaking 1984 study they stated: “pictures are more memorable than their verbal counterparts. Numerous studies have shown that pictures are more easily recalled or recognized than words.”

And when you pair pictures and images in a panel to create sequential art (a fancy term for a comic book), the resulting storyline is much likelier to hook and sustain readers’ interest. In a National Council of Teachers of English article (yes, even English teachers are getting on board), high school teacher Sharon Webster said that graphic novels provide the “chance to capture the curiosity of a student who might never have otherwise given a term like existentialism a glance […] We need to take advantage of every learning opportunity to engage our students in a way that acknowledges the visual world in which they live.”

University of Oklahoma Strategic Management professor Jeremy Short is planning to take that opportunity this summer with a massively open online course (MOOC) called “Introduction to Management.” One of the assigned books for the class is a graphic novel he co-authored called “Atlas Black: The Complete Adventure.” He also has the distinction of being the first academic to convert a Harvard case study into graphic novel format.

In his TED Talk last year, Short talked about receiving positive feedback from students on his course content, and that they were highly engaged in class. But they often reported dissatisfaction with the course textbook, which they also believed was too pricey. “There [was] a disconnect between the material and opening your book and – it’s an instant snooze-fest.”

Short didn’t just want to substitute a course textbook with a slightly more appealing one. He wanted students to see the principles of management come to life on the page. So he created his first graphic novel, Atlas Black: Managing to Succeed, which covers core concepts on management and entrepreneurship. It also features characters his students (mostly senior undergraduates) can relate to.

But Short has encountered criticism for his use of the graphic novel as a teaching tool; he has been accused of “dumbing down material” by using the format. Short cited Art Spiegelman’s MAUS, as an example of a graphic novel that epitomizes the potential of the genre. The story is powerful in large part due to the images that convey the horrors of the Holocaust. In its review, the New York Times called it, “a serious form of pictorial literature.” In 1992, it was the first graphic novel to win a Pulitzer Prize.

Short believes much of the criticism for the format can be traced back to a handful of enduring comic book myths, long considered erroneous by many, and held up by data that was recently disproved. When societal alarm over comic books reached a crescendo in the United States (resulting in senate hearings and a “Comics Code“) in the 1950s, the format went underground. You can see why there was no push to bring the format anywhere near a classroom.

In other countries, however, comic books flourished. And in his TED Talk, Short pointed to countries like France and Japan, where graphic novels have been widely regarded for some time, and accepted as legitimate formats for sophisticated content. Short said he believes the tide has been turning in the United States. And as states have instituted new “common core” learning standards that allow graphic novels to be a part of the curriculum, more schools have embraced them. “Education is changing, Short said, “And we have to change with it.”

Like game changers? Break the mould in the business world with a Masters in Disruptive Innovation from Hult. To learn more, take a look at our blog Matchmaking quiz: Find your perfect school, or explore overall business challenges with a Masters in International Business instead. Download a brochure or get in touch today to find out how Hult can help you to find out everything about the business world, the future, and yourself.