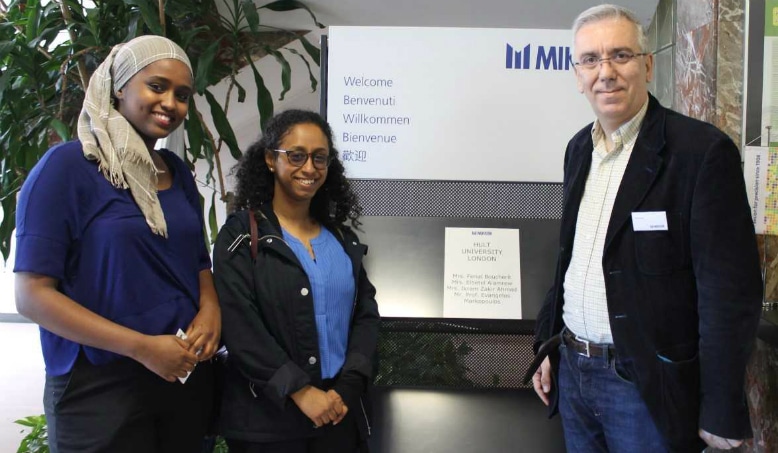 The pace of technological change means that today’s most innovative thinkers are in high demand. They’re also more accessible than ever, thanks to the internet.

And when tricky questions arise for big companies, tapping into the hive mind by crowdsourcing solutions is one way to arrive at outside-of-the-box answers, faster. Major multinational companies from Amazon to Unilever have benefited from the crowdsourcing model, and many more are following suit.

Mikron Machining, a division of the Mikron Group and a world-leading supplier of customized industrial machining systems, was interested in exploring the possibility of crowdsourcing knowledge to improve elements of their development processes. Hult undergraduate students, known for their fresh ideas, collaborated with the company earlier this year to propose an effective crowdsourcing method to meet their needs.

Ronan was one of the speakers on the Digital Futures program. Between sessions, he and Walter spoke about the potential of doing a project with Hult students. “I was quite skeptical at the beginning,” Walter admits. “I knew that the students were quite far away from our highly sophisticated machine tool business.”

However, under the guidance of their Professor Dr. Evangelos Markopoulos, Hult undergrads in the MGT415 class proved more than up for the challenge.

The challenge kicked off with an in-class presentation from Corrado Rossani, Cutting Tool Specialist of Mikron’s Tooling Department. He explained the company’s background and mission, as well as what Mikron Machining hoped to gain through crowdsourcing.

Finding a way to effectively gather intellectual capital—and in this case, highly specialized technical know-how—from all over the world was the challenge given to Hult students. The student team with the winning idea would be invited to present their solution to the Annual General Assembly of Global Mikron Managers in Switzerland.

“Our students are highly intelligent, but they are not engineers,” Professor Markopoulos explains, noting that this challenge would likely involve a steep learning curve for his students. But this didn’t prove a deterrent to the ambitious undergrads. They embraced the opportunity to work with a live client on a real-world business problem.

“I have been teaching for 20 years at various universities around the world, and I have never heard, seen, or experienced a similar case where a world-leading company comes into an undergraduate class and gives a PhD-level challenge,” says Professor Markopoulos.  “This can only happen at Hult!”

Splitting into teams of three, the students learned fast and worked hard in preparation for delivering an initial proposal to an expert panel of representatives from Mikron.

“This can only happen at Hult!”

After an intensive six weeks of developing and honing their ideas, the undergraduate teams were prepared to deliver their first pitches to Mikron. General Manager Walter Sayer, Cutting Tool Specialist Corrado Rossani, and Quotation Engineer Claudia Walser all arrived on campus eager to hear what the students had done so far.

After listening to presentations from the five student teams, the Mikron representatives gave individualized feedback to the participants. Overall, the undergrads made a great first impression. With their innovative suggestions, it quickly became clear that the teams’ thinking could add real value to the business.

With that in mind, Mikron offered an added incentive for the innovative student ideas: three hands-on summer internship opportunities.

After another few weeks of refining their concepts, the students were prepared for their final presentations in class. The stakes were high, as the winning team would have the opportunity to propose their solutions to senior managers at Mikron’s offices in Switzerland.

Mikron’s Walter Sayer, Corrado Rossani, and Claudia Walser returned to campus to see the culmination of the students’ hard work. The final presentations were impressive, demonstrating the depth of understanding gained over just a few months.

“We were impressed with the professionalism of the presentations and the results achieved,” Walter says. “We got quite good outside-of-the-box ideas and food for thought.”

Following the presentations and after some deliberation, the winning team was announced: Ikram Zakir, Ferial Boutcherit, and Elbetel Alamrew were selected as the students with the strongest proposal.

“We were impressed with the professionalism of the presentations. We got quite good outside-of-the-box ideas.”

“We approached the challenge in two ways,” Elbetel explains, “The first was the crowdsourcing method itself—what platform, what strategy, and what payment method. The other was how and where to find and target the right people to participate in the idea sourcing.”

“We started by doing research about the company to understand its specifications and competitive advantage,” adds Ferial. “Following that, we looked at engineers and their environment to understand more about their habits and what they would want.”

“In the end, we proposed the development of a new Mikron Crowdsourcing Platform,” says Ikram. “The platform has a premium version known as Mikron Elite Society, and a standard version called Mikron Idea Hub. Skilled engineers will then be vetted and recruited to be a member of one or both groups.”

Presenting in Switzerland and preparing for a summer internship

Last month, Ikram and Elbetel traveled to Lugano, Switzerland to represent their team and present their crowdsourcing solution at the Mikron Development Center. “It was a surreal experience for me because I have never been to another country in Europe other than the U.K.,” Elbetel explains.

“Visiting the offices and getting the chance to see how the company operates was an amazing insight into the industry.”

Elbetel and Ikram were asked the deliver two presentations. The first was to Executives from Mikron, just hours after arriving in Switzerland. “Both the presentations went well, but we were caught by surprise during the first presentation,” says Ikram. “The number of people we presented to was much more than we expected!”

“I was definitely nervous,” Elbetel admits.  “But seeing all the encouraging faces and knowing that I was doing it with a good friend definitely helped me.”

On the second day of their trip, the two students presented to Mikron’s General Management team, made up of senior-level managers from various global divisions. What was meant to be a 10-minute presentation lasted for nearly an hour, with Ikram and Elbetel’s proposal leading to a lively discussion.

“It was amazing,” says Ikram. “The hospitality from Mikron was overwhelming.”

Following a successful first trip to the Lugano offices, Elbetel and fellow MGT415 students Ferial Boucherit and Diego Gonzales will be returning to Mikron this month to begin an internship and gain a more in-depth understanding of the dynamics of the company. “I hope to gain as much knowledge and experience as I can,” Ferial says. “Having an internship with such a company is a real opportunity.”

Gaining hands-on experience and helping to solve real business problems faced by global companies is central to Hult’s relevant, career-focused approach to undergraduate education. We wish the students luck as they embark on their internships and prepare for future career success.

“I think a live client project is the best way to learn and apply the lectures we get in the classroom.”

Ikram Zakir, Class of 2018, Winner of the Mikron Challenge

Curious to find out more about the real-world experience you’ll gain as a Bachelor of Business Administration student at Hult? Download a brochure.

Like game changers? Break the mould in the business world with a Masters in Disruptive Innovation from Hult. To learn more, take a look at our blog Bringing innovation from the Hult classroom to Pirelli, or explore overall business challenges with a Masters in International Business instead. Download a brochure or get in touch today to find out how Hult can help you to find out everything about the business world, the future, and yourself.

Graduation Lessons: Our Class of 2022 Has a Message for You