Home > Careers > Is the Secret to Success Sleeping on the Job? 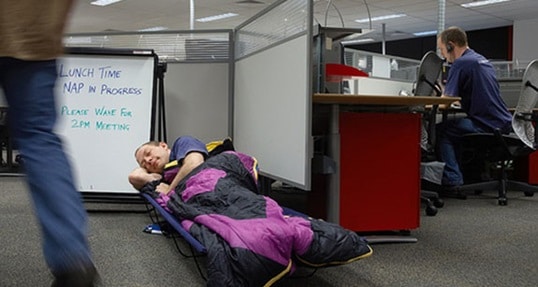 Is the Secret to Success Sleeping on the Job?

“Lunch was from 11:30 a.m. to about 1:40 p.m. The cafeteria was right next to the office so employees would usually select their food, sit, eat, and be done within 30 minutes. Then everyone would return to the office to find the lights off, meaning it was nap time. About half would sleep with their arms and heads resting on their desks, and the other half would use cots, including blankets and pillows. When it was time for work to start up again, the receptionist at the front desk (who was not allowed to sleep) would very softly turn on one of two songs – one of them being the theme song from The Lion King. It played for about one minute, with the volume becoming increasingly louder. When the music finally stopped, the lights would come on and it was time to start work again. Mind you, this is one of the largest companies in China.”

For Matt Arnold, one of the biggest adjustments to the real world, after having just graduated from business school, was getting used to his new company’s afternoon nap ritual. He hadn’t faced a mandatory nap time since kindergarten, so a scheduled siesta for grownups that went beyond a mere 40 winks was a big shift. Arnold had studied in China while working toward his undergraduate degree, and had completed a semester of full-immersion at Fudan University in Shanghai during his MBA program. He spoke Mandarin fluently, and had diligently honed his cultural competency for doing business in the country. But fresh out of business school, and working at a state owned enterprise (SOE) in Shenzhen, he hadn’t anticipated the amount of time and the level of ceremony devoted to the post lunch nap (which continues to be common at many SOEs). One might think that a state-sponsored, quasi-mandatory, mid-day slumber would be a good thing, right?

Arnold observed that the afternoon nap ritual was not all positive, even if it was traditional. “When people wake up, the last thing they want to do is slide right back into work. It takes 30 minutes or so to get back into the swing of it.” He said he wouldn’t advocate a workplace nap time for everyone, but would champion a policy that allowed for employees to take a brief slumber during the day if they truly needed it. “If you’ve got a demanding work schedule, sometimes a catnap is the perfect solution for an energy slump.”

More companies – where nap times are not so traditional – are also beginning to acknowledge that happy, healthy and productive employees are also well-rested ones. Some are instituting policies that allow for daytime shut-eye to help employees improve their productivity. And most of us know this from firsthand experience: there’s nothing more certain to impede our productivity than sleep deprivation, be that slight (an hour) or more severe (several hours). Our brains have to fight harder to focus and remain alert when we’re running low on sleep, and our capacity for creativity takes a nosedive. Consider, too, that extreme sleep deprivation has been used as a torture device to menace people into spilling the beans during hostile interrogations. Sleep deprivation is serious stuff!

Even experiencing a minor sleep debt can have negative consequences. “After only one night of poor sleep, people feel lousy…But accumulated sleep loss…can result in poorer concentration, poorer memory, and slowed reaction times,” wrote Jann Gumbiner in her article “Why Sleep Is Important.” Gumbiner also notes: “Sleepy people make mistakes,” resulting in very bad things, like accidents and medical errors. Clearly, we need our sleep, but – “Most people really don’t get enough sleep,” according to Dr. Charles Czeisler in the video “Why Sleep Matters.” “We are a society that’s burning the candle at both ends.” In the same video, Dr. Lawrence J. Epstein sounds off: “We need to re-think how we prioritize sleep; it is one of the basic building blocks of good health.”

So what can you do if you don’t have access to a nap room or a MetroNap Energy Pod during the day? You can start your very own ritual at night. In his article “How Much Sleep Do You Really Need to Work Productively,” Leo Widrich writes: “When it comes to creating a sleep ritual, one of the key things is to have the last activity completely disengage you from the tasks of the rest of your day.”

Widrich’s suggestions include: a 20-minute walk at the same time every day, using the same route; reading a fiction book to remove yourself from the realities of the present moment; and to follow up your wake-up time with an immediate activity, like having breakfast or going to the gym. What he doesn’t suggest: lying in bed and hitting the snooze button over and over and over. His final piece of advice (which he borrowed from Jim Loehr and Tony Schwarz’s book, The Power of Full Engagement ): “be tired in every dimension…for the highest quality of sleep, you need to be drained, both physically and mentally.” So don’t forget to hit the gym, yoga mat, or jogging trail. Not only will you benefit from the exercise itself, but it will ensure that you’re tired at an earlier hour, allowing more time for a full night of sleep.

If that’s not enough, here are some insightful words from Robert Stickgold, a sleep expert at Harvard’s Medical School: [the] “skills that you learned during the day are being refined and improved while you sleep. That’s why you have to get sleep the first night after you learn [new] things, or it’s too late. The brain actually takes that information and sifts through it and makes sense out of it in a way that we couldn’t while we were awake.” It’s not enough to slog through your finance book during the day, or to learn the names of new co-workers while you’re awake; your brain needs valuable, restorative sleep to process and cement all that you’ve learned. Without it, your hard work during the day could be in vain.

And David Randall, in his article “Rethinking Sleep,” had this to say: “Imagine a near future in which military commanders can know how much total sleep an individual soldier has had over a 24-hour time frame thanks to wristwatch-size sleep monitors. After consulting computer models that predict how decision-making abilities decline with fatigue, a soldier could then be ordered to take a nap to prepare for an approaching mission.” Take a nap? Is that an order? We should all be so commanded.

Perhaps that point in the future is not too far off. We are beginning to see 21st century leaders respond to the call that employees are more productive and creative when they’ve prioritized sleep – and they are re-structuring traditional work spaces to accommodate that objective. Perhaps nap rooms are not ubiquitous now, but it’s probably just a matter of time. Because when we operate under a cloud of sleep deprivation, it feels like our brains and bodies move at the same rate as a ponderous, three-toed sloth. But on the days we are well rested, we feel like superheroes. We feel strong, sharp, and undaunted – with or without The Lion King soundtrack cued up in the background.