Home > Community > Education is the path to a better world 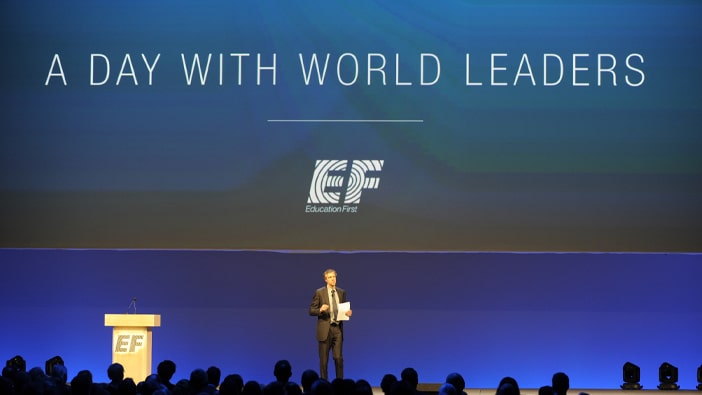 Education is the path to a better world

There are some figures that – with their thoughts, actions, and the roles that they embody – have outlined the borders of the world we live in. Men and women enlightened by a vision that has been conveyed across the generations. Is it wrong to describe them as “myths”? I don’t think so.

The word “myth” comes from the Greek mythòs, which means “narration”, “tale”, and “story”. A true leader, in order to be considered as such, must be able to tell stories. We, as human beings, are nourished by narrations, and we feel the need to appreciate, to evaluate, to criticize other people’s stories, before being able to write our own. Every leader whose resonance have been disseminated across the borders of countries, societies, and cultures, has engraved at least one sentence on the everlasting stele that records the world’s events. If somebody had told me that, within the same day, I would have been sitting in front of such a gathering of political, corporate, and social legionaries, I would have rewarded them with a scornful laugh.

To celebrate the 50th Anniversary of EF – the biggest language organization in the world, as well as a partner and affiliate of Hult International Business School – we students were invited to take part in an event that, from the reminders of security measures to the title typed in golden letters on the top of the creamy-colored invitation card –“A Day With World Leaders”- seemed very promising. Lacking any information or details, we filled up the orchestra of the Haynes Convention Center, a majestic building in the heart of Boston, surrounded by the elegant, redbrick block that stretches around Newbury Street. In that architectural atmosphere that recalled a Dickensian industrial revolution, flaunting all its bright greatness from the high glass walls of the convention center, we were guided into a theatre lit up just by electric-blue spotlights. There, I witnessed one of the most exciting performances of my life.

A performance, yes, since the succession of the passionate speeches made by those global leaders was similar to a concert. The vocal cords of Bill Clinton, Gordon Brown, Steve Wozniak, Charlie Baker, Deval Patrick, Julia Gillard, Priyanka Chopra and Alexander Likhotal intercrossed their vibrations with the cords of the audience’s hearts. Introduced by Dr. Edward Hult, these representatives of the global society composed and executed a symphony of stories, encouragement, and faith.

Those leaders, lit by the theater’s bluish halo, were talking to us, with us and for us, about the importance of education and training in the creation of a better world. Bill Clinton – former U.S. President – underlined how the reduction of wealth inequalities, the path towards a more sustainable planet, the development of young entrepreneurship all across the world, pass through education. Gordon Brown – former Prime Minister of the U.K. –  bewitched the audience with a deep, powerful and touching message, funneled through his charismatic figure; a message that was able to cross every cultural barrier: “You can live for days without food, for 8 minutes without air; you cannot live for a second without hope”.[Tweet ““You can live for days without food; you cannot live for a second without hope” – Gordon Brown”]

Hope. Hope for the future of young people like us. Hope for the future of nations and international diplomacy. Alexander Likothal – the knowledgeable political analyst and advisor of the former leader of the Soviet Union, Michail Gorbachev –  referred to this hope several times by illustrating, in an accurate and impartial way, the Russia-Ukraine-USA triangle of powers.

Hope for the global economy, for the growth and innovation. Steve Wozniak showed that knowing how a computer works can trigger a profound, everlasting change in a child’s perspective. Hope, in the words of Unicef Ambassador, Pryianka Chopra, for the girls and women who are not entitled to receive an education, and for those among them who do not even dare to think that actually they have the right to receive one.

A symphony is made of sets of chords, which are perceived differently according to each individual’s sensibility. There is one note though, that I am resonated with every single young person at the event. When the 42nd President of the United States of America urges you to strive for changing the world, you just hang off his words. When the former British Prime Minister incites you into improve yourself in order to reach noble goals, you listen to him.

Coming out of the theatre at the end of the speeches, I looked again though the glass walls drenched in the afternoon light, so rare in these times of seemingly everlasting snowy weather. For the second time that day, my thoughts flew to the industrial revolution, to the technological and social innovations that the tumultuous 19th Century brought about. Entering that light, I become suddenly aware of the responsibility that has been appointed to my generation. My generation must be the protagonist of a new revolution; a revolution of education, built upon dynamic thoughts, knowledge, ideals, aspirations, multi-lateralism, and management of those risks that endanger society. Bill Clinton’s warning was very clear; “You should not do nothing just because you cannot do everything”.[Tweet ” “You should not do nothing just because you cannot do everything” – Bill Clinton”]

We will do something, Mr. President. Something that matters, so that our successors will be proud of us, at least as much as my young generation can be proud of those bright people who stood apart in yours.

Kickstart your career in this education and innovation hotspot by studying at Hult’s Boston business school. To find out more, take a look at our blog Student tips: 8 things to do and see in Boston. Download a brochure or get in touch today to find out how Hult can help you to learn about the business world, the future, and yourself.