Home > Careers > Don’t Be Afraid of Failure: Get to Know It Well—Your Career Will Thank You 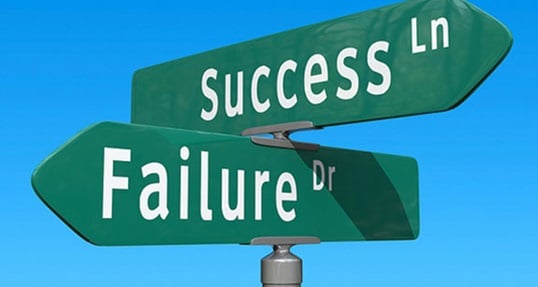 Don’t Be Afraid of Failure: Get to Know It Well—Your Career Will Thank You

If you haven’t failed at anything by the time you read this sentence, then we at Hult Labs urge you to share your secret for continued success in the comments section below. But I’d bet the $20 in my pocket (or the mocha on my desk) that you’ve dealt with failure at some point in your life and career – and probably more than once. I’m also willing to bet that after the sting of failure receded somewhat you realized that you had learned a thing or two, and that your ability to bounce back each time was a bit faster and better still, a bit easier.

But before it can get easier, there’s no evading the baptism by fire that only failure can bring in school, at work, and in life. In 2010, Guillermo Sanchez Jr., just out of business school only two years, was tapped by his family’s business to lead a brand new venture. Based in Monterrey, Mexico, Sanchez was tasked with piloting a new outsourcing service for a client, an IT distributor, in Texas. The economic environment at the time was still clouded by the recent financial crisis, and the exchange rate between the US Dollar and Mexican Peso fluctuated wildly on a daily basis. Both sides signed a contract that included a fixed exchange rate for services – one that Sanchez began to regret when the Mexican economy soon rebounded.

“Even though we were meeting the client’s expectations, having an exchange rate that wasn’t aligned to reality was making us lose a lot of money,” said Sanchez. “Not only that, but we started having problems recruiting because we could only offer below market rates. It was a big failure. We nearly had to close shop the very first year.” Mother Nature had also played a role: when Hurricane Alex hit Monterrey in June of 2010, the powerful storm brought the city to a standstill, and displaced Sanchez’s team for three months.

It was only when Sanchez approached the client to discuss the impending failure of the project (and his family’s business) that both parties were able to collaborate on what he called a “mutually-designed solution.” Prior to the sit-down, Sanchez had also learned firsthand how the “blame game” only served to obscure a real, workable solution for everyone involved. “Failure can come due to unpredictable factors and not be anybody’s fault. Thus, finding who to blame is not only harmful, but it is also often pointless,” he said.

In his article “Make Failure Your Greatest Asset,” Ted Coine asserts that the experience of failing is critical because it helps us to develop “one of the most important traits a leader needs to be successful: empathy.” But you don’t just have to take Coin’s word for it. Business schools are beginning to recognize that successful graduates need more than “the chops” to get things done; they need essential skills like persistency, resilience and empathy. Because the business world highly values these skills, business schools are now also looking for them in prospective students.

In the article “B-Schools Know You Think, but How Do You Feel?,” Melissa Korn writes that “schools are trying to choose from a crowded pool of well-qualified applicants and get a sense of the human being behind the application by adding personality tests and…in-person interviews to the traditional battery of essays, transcripts and recommendations. Now, prospective M.B.A. students need to shine by showing emotional traits like empathy, motivation, [and] others.”

As business schools experiment with ways to measure “softer” skills among applicants and students (and figure out how to help students develop these skills further) one thing is clear: assessment tools may show students where they stand in the moment, but they don’t offer an action plan for improvement. What’s a surefire way to improve your levels of resiliency and empathy, among others? You have to take risks and you have to fail. Rinse and repeat. Forever. And that’s OK.

“Everybody tries to avoid failure,” said Sanchez, after recounting the story about the project that nearly failed. “Risk is inherent in business. If you try to avoid risk, you’ll never get any business done. If we had waited until circumstances were perfect, we would have never started our test pilot. Sometimes you win, and sometimes you don’t, and that’s fine, as long as you keep trying.”

Did the near-failure of the project lead him to feel a greater degree of empathy? “I’d like to think so,” said Sanchez. “I learned a lot about risk from business school, but in a very abstract way. I learned how to quantify it, but not how it feels or how to face it. It definitely took being in a real world situation to learn about risk and failure more personally. It is more valuable to know oneself in the face of failure than to calculate a probability. I would advise students to try out new things that are hard and fail constantly until they succeed so that the learning never goes away.”

So, in a sense, failure can be our ally, right? And maybe if we look at it that way we could think about deliberately courting it from time to time, carefully at first, and then more brazenly over time. Because maybe if we get to know it a little bit better we don’t have to be so scared when it comes to visit. Instead of running and hiding, we can sit it down for coffee and a good talk. Maybe we’d invite failure to come around more by being more willing to take smarter, riskier bets in our jobs and in our lives. And if we pay attention, maybe failure would teach us that we are more capable, resilient, and creative than we ever imagined.

About a year ago, writer Neil Gaiman gave a commencement address at the University of Arts in Philadelphia in which he told the graduating class: “When things get tough, this is what you should do: Make good art.” Quick interjection: you don’t have to be an artist for the aforementioned words to resonate. Substitute whatever your passion is wherever the word “art” appears, and it should hit home. Back to Gaiman: “Husband runs off with a politician — make good art. Leg crushed and then eaten by a mutated boa constrictor — make good art…Make it on the bad days, make it on the good days, too.” Through life’s slings and arrows (and rainbows and rose gardens), make the commitment to persevere no matter what.

So it’s in the spirit of professional and personal growth that we’ll conclude with another rousing, if not failure inducing, Gaiman quote. “If you are making mistakes, then you are making new things, trying new things, learning, living, pushing yourself, changing yourself, changing your world. You’re doing things you’ve never done before, and more importantly, you’re Doing Something. Whatever it is you’re scared of doing, Do it. Make your mistakes, next year and forever.”

Hult offers a range of highly skills-focused and employability-driven business school programs including a range of MBA options and a comprehensive one year Masters in International Business. To find out more, take a look at our blog Why going to business school in 2019 is a resolution you should keep. Download a brochure or get in touch today to find out how Hult can help you to learn about the business world, the future, and yourself.