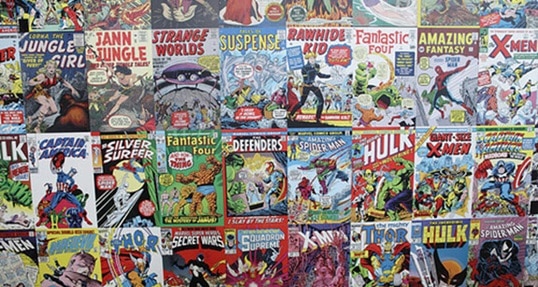 Can Reading Comics Make Us Smarter?

Of all of our senses, it’s vision that requires the most cerebral horsepower to process information. And while words on a screen or a page can be compelling, it’s pictures that are a cut above in terms of delivering information, according to Alex Lundry, Vice President and Director of Research at TargetPoint.

“In neurology, this is called the ‘pictorial superiority effect’ […] If I present information to you orally, you’ll probably only remember about 10% 72 hours after exposure, but if I add a picture, recall soars to 65%. So we are hard-wired to find visualization more compelling than a spreadsheet.”

So maybe this is why when it comes to reading, some people are more likely to gravitate toward a comic book (let’s consider “graphic novel” a synonym) than a picture-less tome – even as adults. But what if your comic book days are long behind you, or you never had any because you considered them superfluous, or even harmful?

Comic books have long had critics. Probably the most vociferous one was psychiatrist Frederic Wertham, who declared decades ago that comic books morally corrupt impressionable young readers, taking them down life paths of dissolution and violence. Imagine if he’d lived to see video games! He also asserted that he had the research to back up his claims.

But a New York Times article last week brought Wertham back into the spotlight (his legacy anyway; he died in 1981). Since 2010, assistant professor of Library Science, Carol Tilley has combed through all of Wertham’s research. In the process, she discovered that he had “manipulated, overstated, compromised and fabricated evidence.” The cracks in the long-standing wall of “evidence” against comic books, evidence that had been given credence in the arenas of mental health and juvenile delinquency, grew into chasms.

And then there’s this. A recent study on graphic novels conducted at the University of Oklahoma builds on the idea of the pictorial superiority effect: not only may they help boost memory, but they may also be a far more effective teaching tools than the long-established textbook.

An article from the January edition of Look at OKC magazine describes details of the study, in which over a hundred business major undergraduates participated. One half of the students were asked to read a graphic novel on important management concepts, while the other half were asked to read the same concepts in textbook format. Afterwards, all the students were quizzed. Those who had read the graphic novel were more likely “to recognize direct quotes” than those who had read the textbook.

And in a related study, over a hundred students were asked to give feedback on a graphic novel they had been assigned to read in a business class; 80% said they preferred the graphic novel format to a textbook.

None of this is very likely a surprise for Christina Blanch, who teaches at Ball State University, and is also leading the charge on a massively open online course (MOOC) called “Gender Through Comic Books” that starts in April. Digital Spy conducted an interview with her back in January on her experience incorporating comic books in the classroom.

In the interview, Blanch talks about swapping out a “dry and boring” anthropology textbook for a comic book that touched on relevant themes in the class. Said Blanch in the interview: “It was amazing. The students were all engaged, they all read the material, they even read the textbook to make sure that they were getting things right. It started so much more conversation in the class.”

Blanch has a theory about why students respond so well to comic books in the classroom, which she believes has a lot to do with the brain’s ability to process a limited amount of information at one time (typically, up to seven items): “When you have something with a word and picture combined, that […] counts as one schema, so you’re only processing that one thing and you get so much more information out of it.”

While Blanch reports that reactions from her teaching colleagues have been “mixed,” some first-time critics have been transformed into advocates after seeing the results. Some have even asked her to teach a class on teaching with comic books.

Once viewed as a societal bane by some, comic books are now increasingly recognized as an educational blessing of sorts for teachers and students alike. While more research has yet to be done, preliminary results are promising and clear: incorporating comic books in the classroom can increase student engagement and learning, stimulate curiosity, and improve memory. And without any research to underpin this next assertion, I will posit that students are very likely not to complain about that – and may even get better grades because of it. An all-comics curriculum? I wouldn’t laugh just yet!

Hult offers a range of highly skills-focused and employability-driven business school programs including a range of MBA options and a comprehensive one year Masters in International Business. To find out more, take a look at our blog 5 big reasons why to apply early for your MBA or Masters. Download a brochure or get in touch today to find out how Hult can help you to learn about the business world, the future, and yourself.