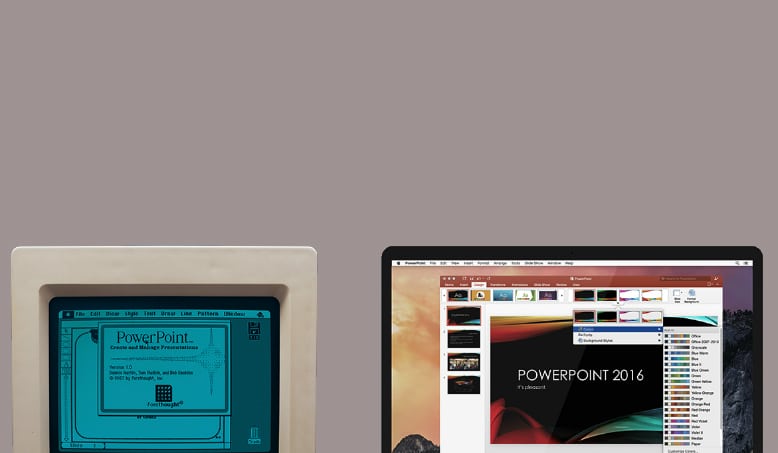 Disruption, innovation, and endurance: A brief history of PowerPoint

The journey of a thousand presentations begins with a single slide.

This is a story about love in the time of ClipArt, about innovation persevering through really lame animations. This is the story of people who refused to copy-and-paste their lives and instead chose to change the world.

“PowerPoint sought to disrupt an established business model, much like Uber is doing to taxis. We offered a superior replacement for a familiar capability.”

This is the story of PowerPoint.

Our opening slide begins in 1984. Robert Gaskins, a computer scientist with a degree from Berkeley, had an idea. He was tired of spending hours preparing projection transparencies and using chalkboards to illustrate presentations.

And so he, with the help of developers Thomas Rudkin and Dennis Austin, set out to create a presentation program that would provide an easy way to make and present slides.

They called this program Presenter, which was later renamed PowerPoint.

The team presented the program and business plan to their software company, fittingly named Forethought, in Sunnyvale, California. And just as Prometheus brought down fire to humans, Forethought quickly spread the revolutionary idea of PowerPoint to the world.

Everyone wanted a bullet point in this story. Apple invested $432,000 in PowerPoint, making it Apple’s first ever venture capital investment. By 1986, the PowerPoint team was using PowerPoint to explain their business strategy. (You can even see their 1986 “New Product Summary” here.)

In 1987, Microsoft managed to outdo Apple for once and snatched up PowerPoint for $14 million.

Following their acquisition, Microsoft released its first official version of PowerPoint in 1990. By 1993, PowerPoint was making $100 million in sales annually.

The early versions of PowerPoint only produced transparencies, handouts, and speaker notes until the rise of laptops made transparencies obsolete.

1997 became the year that changed the course of PowerPoint history forever. PowerPoint 97 was released with major improvements and updates, most notably, custom animation. This allowed presentations to faded-zoom into the future. And the fact that users needed no special programming skills to animate their presentations made everyone pinwheel into love with PowerPoint.

Since 1997, PowerPoint has continued to improve and grow. Newer versions have come out with audio and video embedding, web support, and more slide transitions than ever before.

By 2003, PowerPoint revenues for Microsoft were over $1 billion annually. By 2010, Microsoft announced that PowerPoint had been installed on a billion computers worldwide. A study done in 2012 reported PowerPoint held approximately a 95% share of the presentation software market, eclipsing competitors such as Apple Keynote, Google Presentations, and Prezi.

PowerPoint’s continued domination may be down to the program’s gold-standard status in educational settings for students and professors. And, for the most part, people are satisfied with their PowerPoint experience—there is no compelling reason to change. It seems that PowerPoint is here to stay.

Meanwhile, founder Robert Gaskins, has settled into retirement and written a book about inventing PowerPoint for those who want to discover more about the birth of this innovative and enduring program.

Like game changers? Break the mould in the business world with a Masters in Disruptive Innovation from Hult. To learn more, take a look at our blog Week of Disruption, Fall 2018: Embracing a changing world, around the globe, or explore overall business challenges with a Masters in International Business instead. Download a brochure or get in touch today to find out how Hult can help you to find out everything about the business world, the future, and yourself.

Priyanka is a Hult contributing author. She graduated from Harvard with a degree in Linguistics and has a passion for travel, cashews, and the syntax of passive sentences.

The Emerging Economies Under the Dome of the Fourth Industrial Revolution