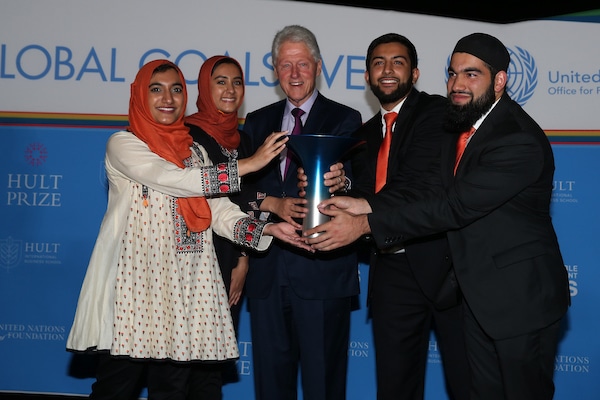 The intersection of entrepreneurship, innovation and social impact is happening in a most unlikely place: the largest slum in the world.  Pakistan’s Orangi Town is a slum of 2.5 million people. It’s the proving ground of a start-up that recently won the $1 million Hult Prize, an annual global business competition tackling the world’s biggest challenges. This year’s theme is to dramatically improve the lives of refugees.

Roshni Rides captured USD $1 million in seed funding as the 2017 Hult Prize winner. The start-up is already shaking up the existing transportation network in the slum. The four founders are New Jersey college students who traveled to Pakistan and studied the rhythm of life in Orangi Town.

“This is the largest slum in Asia. They are displaced, urbanized refugees,” says Hasan Usmani, a first-generation Pakistani American and recent Rutgers University graduate. “All four of us on the team come from parents who are immigrants, so this is for them.”

Here’s how Roshni Rides works: The start-up pays rickshaw drivers a monthly salary to drive on a set route with fixed fares.  For passengers, the system eliminates price gouging. For drivers, it creates a steadier flow of passenger volume.

Supply chain management in the slum

The founders of Roshni Rides are all supply chain management majors at Rutgers Business School.  They put those streamlining skills to work in the slum.

“The whole business is about creating efficiency,” says CEO Gia Farooqi.” A rickshaw driver now picks up six to eight customers a day, but two million rickshaws are on the road. That’s crazy! The rickshaws are underutilized. So we tried to answer why there’s the mismatch.”

Here were the challenges:

The global view: A growing crisis

Former President Bill Clinton announced the winner of the Hult Prize at the United Nations in September. “This year’s topic is particularly important because we have 65 million displaced people in the world—the largest number since World War II,” said Clinton.  “This toll of involuntary migration is enormous.”

According to the United Nations, 55% of the world’s refugees come from South Sudan, Afghanistan and Syria.  20 people are displaced from their homes every minute because of conflict or persecution. Pakistan and Turkey are among the biggest host countries for refugees.

Whether in a refugee camp or a slum, it’s all about survival.  “They are in a spiral,” explains Bill McDonough, architect and co-author of the book “Cradle to Cradle” on sustainable living. “Sustainability has three aspects: economic, social, and environmental. Graceful and creative things in life happen in peace. If you’re in a war, you’re not planning a garden.”

-Bill McDonough, architect and co-author of Cradle to Cradle

The judges’ view: Passion is a given. Show financial discipline.

The ideas ranged from transportation upgrades to a digital jobs platform for refugees. The choice was so difficult that it took three rounds of voting to determine a winner. The deciding factor: financial viability.

“Social entrepreneurs often lose sight that they have to run a business. You can’t rely on donations,” says judge Chuck Kane, chairman of One Laptop Per Child. “If you’re not profitable or just break even, you impact fewer and fewer people.”

“It was hard to actually know where USD$1 million would be most transformative,” says another judge Premal Shah, President of the microfinance non-profit, Kiva.org. “What I look for is pilot traction.”

The pilot that Roshni Rides conducted in Pakistan helped them reshape their product and business plan. The original idea was a network of solar-powered rickshaws. The team quickly saw the cost challenges of converting existing rickshaws into a solar vehicle so they scrapped the idea.  The team also mapped out ten stops for customers on a rickshaw shuttle route. After conducting surveys, the team learned the majority of passengers wanted to go to the same few places (e.g. market, schools, hospital, employment center) so they whittled down the route to these locations.

“We have a lot of data from our pilot program to go through,” says Farooqi. “We have a scaling plan and we want to expand to the rest of South Asia. We want to be in Bangladesh, India, and Sri Lanka by Year 5.”

Hult offers a range of highly skills-focused and employability-driven business school programs including a range of MBA options and a comprehensive one year Masters in International Business. To find out more, take a look at our blog How the Hult Prize turned me into a social entrepreneur. Download a brochure or get in touch today to find out how Hult can help you to learn about the business world, the future, and yourself.