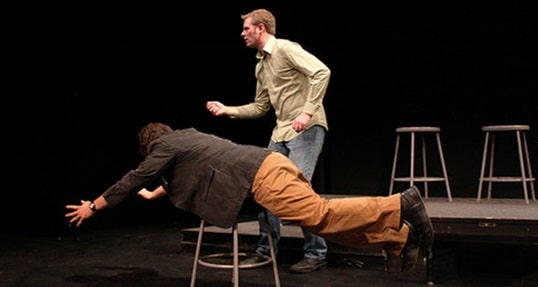 As little kids we took trips to outer space, dallied courageously with dinosaurs, and accomplished unbelievable feats of bravery—all while never venturing beyond a pillow fort in the living room, or the tree line of a backyard. No one gave us explicit permission to test the boundaries of our imagination when we were small; we just did it naturally because we had imagination in abundance. And though we may not have felt our imaginative instinct slip away (for most of us) as we grew older, it did recede over time, as qualities like maturity and responsibility wrestled their way into more prominent positions. Not that our imagination disappeared entirely as we grew older, it just went into hibernation. And there it has stayed, unless we summoned it forth on rare occasions to help our adult selves out.

So you might be a bit surprised to find out that some business students are being asked to awaken their imaginations and reignite that spontaneous play of youth—in the classroom. In what class would they do this, you ask? Why, in their improv class, of course. And just what are business students doing taking improv classes, you may wonder? The answer’s easy: they’re honing critical professional skills like creativity, teamwork, and the ability to venture out from the safe cocoon of their comfort zones to take risks. That’s right— core courses like finance and accounting are still essential but because the real world isn’t all linearity and logic, soft skills, particularly in leadership roles, are more important than ever before. And business students sometimes need a push to momentarily set aside their analytical tendencies and think in new ways. Improv courses (even acting classes) are helping students to do just that.

So what’s the first rule of an improv class? It turns out to be pretty easy to remember. In Julia Flucht’s article “When the Art of the Deal Includes Improv Training,” she describes MIT instructor Daena Giardella’s essential axiom in two words: “Yes, and.” So, what exactly does that mean? Let’s say in a scene with your improv partner, you suddenly get the suggestion that it’s time to go from riding bumper cars to, say, battling Vikings. By employing the sole rule of improv you would respond by saying: “ Yes…and …let’s pick up magic wands on the way to zap them into compliant kittens.” In one small motion, you’ve agreed with your partner and added to the storyline. But just why exactly is it so important to agree with your improv partner?

Part of what’s key to an improv exercise is a “suspension of judgment,” which Mark Tutton brings up in his article “Why Using Improvisation To Teach Business Skills is No Joke.” He quotes Fuqua professor Robert Kulhan as saying: “Improvisation isn’t about comedy, it’s about reacting—being focused and present in the moment at a very high level.” And reacting as coolly as a chilled cucumber means escaping what Kulhan describes as “analysis paralysis.” Tutton quotes Kulhan as saying: “There’s a misconception in business that you have to be 100% correct 100% of the time, whereas the truth is you have to be 100% correct about 10% of the time—the rest of the time you have to just make decisions…if you just make a decision you’ll have room to adapt and react.” Remaining free of judgment makes snappier decision-making more possible, and without the fear of making an unalterable error.

So what if you seemingly can’t find the time or mental space in your hectic day-to-day schedule to shake your hibernating imagination out of its slumber? What if you just can’t get into the improv swing of things? Don’t worry, it’s a common reaction, and it’s called “idea blocking.” Here’s also where there’s a really strong parallel between improv and the work environment: “Giardella says idea blocking happens all the time in the business world. And one of the most common blocks is the ‘yes, but’. Even though you say ‘yes’, the ‘but’ says, ‘Yeah, but that’s not really valid because here is the better point,'” wrote Fluch.

The more students practice improv techniques, writes Fluch, the more mindful they become of catching themselves saying “yes, but” to their peers—in and outside of the class. That alone can be a very valuable bit of self-awareness to take with them out into the real world as they establish themselves in new careers, and strive to be effective team players and leaders.

There’s also an element of failure in the class, writes Fluch, which can really get business students in a bit of a tizzy. Fluch quotes Giardella as saying: “Usually I get so many eyebrows going up because of course in a business environment, and certainly an academic environment, use the word ‘fail’ and people take notice…But as an improviser, you gotta know how to rebound. It’s not about whether you make the perfect offer, it’s about how you rebound if you don’t.” In essence, every so-called failure creates another opportunity to learn something new and to incorporate that new knowledge going forward.

Ultimately, given that there’s no insurance (that we know of) to guard against failure, how we manage to pick ourselves up when we have in fact fallen down (with some dignity, we hope) is really what matters most. While an improv class may not help build a more effective marketing plan, or financial model, it will help contend with all the unanticipated “fires” and team dysfunctions that crop up on our professional journeys. So before you rush to tell someone “no,” think of saying “yes.” And before you add the word “but,” try to force out an “and.” If you have to add something about outer space, monsters, or Vikings, have at it. A little levity can go a long way—and not just in an improv class.

Hult offers a range of highly skills-focused and employability-driven business school programs including a range of MBA options and a comprehensive one year Masters in International Business. To find out more, take a look at our blog Bloomberg ranks Hult in top 100 Global MBAs. Download a brochure or get in touch today to find out how Hult can help you to learn about the business world, the future, and yourself.