Home > Thought leadership > The Statistics of Grit: How a Baseball Applies to the Real World 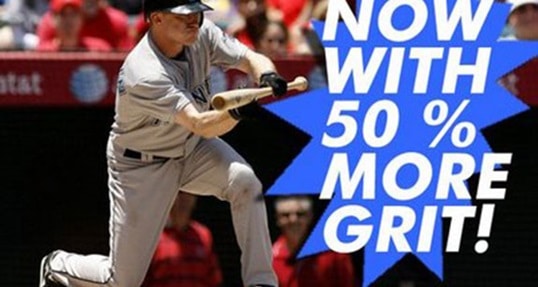 The Statistics of Grit: How a Baseball Applies to the Real World

Spring is here, and for many of us, that means the joyful return of baseball. For me, there’s nothing better than a pleasant day at the ballpark, enjoying peanuts and Cracker Jacks, watching America’s pastime. But recently, thanks to my brother, I found myself thinking how the recent debate over evaluating player performance in baseball is also applicable to what organizations want from our Hult graduates. Just stay with me.

For those who don’t know, the debate over how to properly value an individual baseball player’s contributions to his team’s overall success has been raging for several years. In 2003, the book (and later movie) “Moneyball” was published, and promptly upended traditional thinking about how players are supposed to perform. “Moneyball” ushered in new ways to measure player performance based on complex statistical formulas, and overall introduced the concept of “added value” to the baseball diamond. (Here’s a good article that summarizes the current debate.)

The debate can sometimes break down along emotional lines. Some value a player’s “grit,” “chemistry” and “determination,” while others focus purely on cold, hard numbers. But this conflict is not limited to baseball – companies can have trouble with this balance as well. Do you manage purely by numbers and data, or is there something to having a co-worker who makes everyone feel good and keeps morale up, even though they might not be a top performer? What is the right balance to strike?

One writer attempted to quantify “grit” in baseball terms – i.e., lots of getting on base, not a lot of power, good fielding – otherwise known as “the little things.” Coincidentally, my brother started a fantasy baseball league this year based on his and his friends’ definition of “grit” – where walks, hits, stolen bases and runs give you points, but extra base hits and home runs take away points.

I am obviously a baseball fan, so I couldn’t resist the concept. I joined the league, picked my players, and then started to notice something interesting. The players who did “the little things” – even getting on base a couple of times through walks and not hits – often had just as many points as star players who hit a lot of home runs. Though the rules told me this would happen, I was surprised to see its effect on my thinking. Even though I knew instinctively that a home run is better than a single or a walk, I started rooting for my players to just get a single.

Noticing this change in my behavior made me think, because this is not that different from what we’ve been hearing from employers on what they want from MBAs. Employers know that hitting home runs in the workplace is hard. So they don’t want newly minted employees to try and hit home runs right away. They want employees who can “do the little things”: show up every day, play hard, get on base once or twice, and be a positive contributor without needing to be the star. But that requires a certain level of self-awareness. Employers don’t expect new employees to be perfect, but they do expect them to perform, and to understand their strengths and weaknesses more deeply.

For those of you trying to get jobs, it may take a certain mental adjustment to shift away from the mentality that you need to be the star performer right out of the gate, to one where the goal is to work hard to “get on base a couple times during the game.” Later, when you have more experience under your belt, you can start focusing on swinging for the fences and hitting some home runs. Even a player who wins a “Most Valuable Player” award doesn’t start out at the top of his game when he first picks up a bat or a glove. He works hard at improving and building his skill set, and hopefully, over time, improves his skills.

The debate over how to properly evaluate a player’s performance in baseball may rage on, but as for me, I have a newfound appreciation for “grit,” on the field and in the workplace. And as for the organizations that hire MBA graduates? If they can more accurately value their newest employees’ contributions, taking into account more than just the numbers, they just might be surprised at what they find.

Adam Carstens is Director of Research at Hult International Business School, and a member of the Hult Labs team. Unfortunately, he’s a Mariners fan.

Make the most of what your career has to offer with a Masters in International Business from Hult. To learn more, take a look at our blog The privilege and responsibility of being part of the global generation, or give your employability a huge boost with an MBA in international business. Download a brochure or get in touch today to find out how Hult can help you to explore everything about the business world, the future, and yourself.