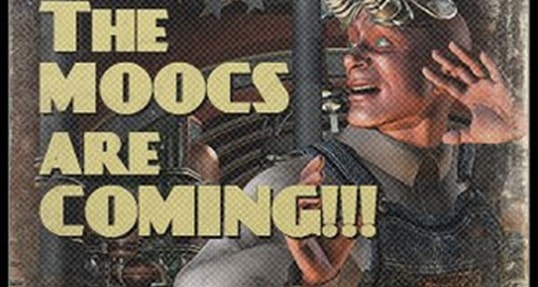 The MOOC Phenomenon: Here to Stay?

Are you interested in learning more about global sustainable energy? How about cryptology – or brain science? Or maybe you want to try a basic course on logic, and then mix it up a little with a class on ancient Greece?

Massively Open Online Courses (MOOCs) have made it easier than ever to learn about a new subject, or augment the knowledge you already have on a slew of different ones. And because MOOCs are offered virtually, all it takes are an Internet connection, interest in the subject matter, and some spare time. Another appealing factor: grades aren’t emphasized, if they are given at all. But then, no course credit or certification is offered (yet) so grades are kind of a moot point. Still, popularity is steeply on the rise.

Companies offering MOOCs (the most popular being Coursera, Udacity and edX) have joined forces with a long and growing list of universities to offer a wide-range of classes. They are also declaring some audacious goals. Coursera’s website says: “We envision a future where the top universities are educating not only thousands of students, but millions.” Udacity’s website says that they are “making high-quality classes affordable and accessible for students across the globe,” and that it “is democratizing education.” One of Udacity’s advisory board members, William Bennett, wrote a piece for CNN Opinion in which he stated that CEO, Sebastian Thrun, is ushering in an “Athens-like renaissance.”

Laura Pappano’s New York Times article late last year, “The Year of the MOOC,” quoted Coursera co-CEO Andrew Ng as saying that the company is “[growing] faster than Facebook.” And that’s not a far-fetched claim considering that the company is not even a year old, and has already reached 2.3 million users. The same article quoted edX President Anant Agarwal as saying that 2012 was “the year of disruption.”

For Coursera and Udacity at least, their bold goals have been backed up by some bold venture capital (which begs a question addressed later in this post). This significant financial backing is all the more noteworthy, given similar MOOC-like ventures that came before them and did not fare so well.

In 2003, Columbia University shut down a MOOC precursor, Fathom, an online learning portal it had launched three years earlier. The portal provided courses from Columbia and other learning institutions, but also museums and libraries – some for a fee. It had targeted a wide swath of users – from individuals to businesses – all over the world. And while it had reached over 65,000 users in over 50 countries, enrollment rates couldn’t keep up fast enough with the cost of producing course content. Most students weren’t willing to pay for online classes that had a fee attached.

In 2006, the once-heralded AllLearn also closed its virtual doors. Founded by the triumvirate of Stanford, Yale and Oxford in 2001, the courses were originally intended for alumni, but later opened up to individual users. But AllLearn couldn’t meet the enrollment requirements to break even (courses were approximately $200 each), and the courses themselves were also costly to produce. In the article “What Went Wrong with AllLearn,” the author speculated: “The company might have been hard-pressed to ‘sell’ the value of the non-credit courses rather than a degree with the ‘elite university’ seal.”

So why – six years later – have MOOCs caught on fire? For starters, they are free and the diversity of courses is breathtaking. Then there are other factors, like brief lectures, a greater level of interaction (class forums allow students to ask each other questions and discuss course topics), and in some cases, teaching assistants provide feedback. The rising costs of higher education also make MOOCs attractive to students who want to fill in education gaps, but are hard pressed to pay tuition and book fees. There’s also the fact that MOOCs are not just a domestic phenomenon; they have become popular overseas, managing an impressive global reach in a short period of time.

And then there’s probably the biggest difference of all: the high quality of instructors. In her article, Pappano writes that MOOC providers choose instructors who are great at teaching – not because they have amassed a body of research in a specific field. She quoted Dave Stavens, a co-founder of Udacity as saying: “We reject about 98 percent of faculty who want to teach with us.”

But Stavens didn’t stop there. “Just because a person is the world’s most famous economist doesn’t mean they are the best person to teach the subject.” Pappano also captured Stavens’ prediction that there will be “a day when MOOCs will disrupt how faculty are attracted, trained and paid, with the most popular ‘compensated like a TV actor or a movie actor.’ […] ‘Students will want to learn from whoever is the best teacher.’”

But MOOCs are still in a nascent stage. A plethora of issues have arisen for which solutions and answers have yet to be formed. Do peer assessments work (a common way MOOCs provide feedback to students)? What about claims of rampant cheating and plagiarism? And then there’s the biggest head scratcher of all surrounding MOOCs: how will they make money? The most popular ones have rounds of infusions that will give them some time to build their business models, and at the helm are some very smart people. However, right now there are only speculations and educated guesses for how MOOC providers will fuel a revenue stream. Are MOOCs the latest fad in education, or are we truly at a point of “disruption” in the industry – as some people claim? Maybe 2013 is the year we start to find out.

Hult offers a range of highly skills-focused and employability-driven business school programs including a range of MBA options and a comprehensive one year Masters in International Business. To find out more, take a look at our blog MOOCs: One Size Does Not Fit All. Download a brochure or get in touch today to find out how Hult can help you to learn about the business world, the future, and yourself.