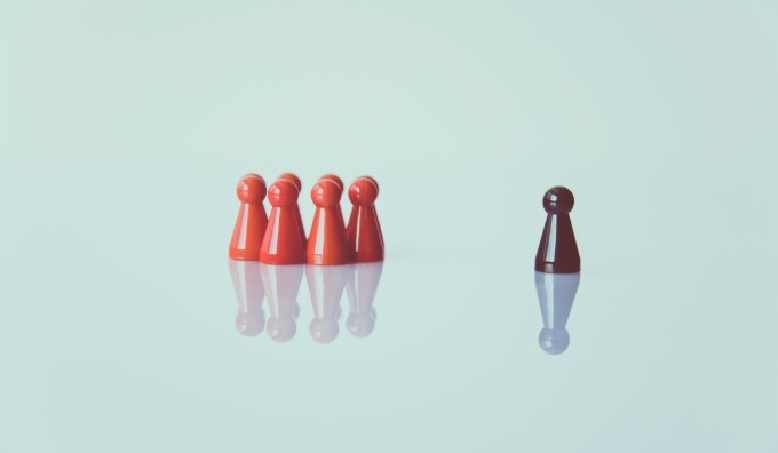 Pioneers are those who are naturally at the forefront of innovation—the first to do things. To use Peter Thiel’s term in his book “Zero to One,” they’re “building the future.” My research, which was conducted in the UK, Uganda, and Dubai,  in the latter half of 2019 was a fascinating journey through the minds and experiences of 26 successful pioneers: a combination of entrepreneurs and authors. I wanted to understand what influenced their pioneering mindset, whether this led to a unique set of leadership challenges, and how they tackled those challenges. I wanted to learn something that could help other pioneers to be more effective leaders. Particularly in Sub-Saharan Africa, where I spend much of my time. And where effective entrepreneurship is a critical component to economic development.

This was a natural extension to the research I conducted with Hult Ashridge colleagues some years back on how leaders work with risk. I covered this in my book “Risky Strategy,” which was published by Bloomsbury in 2016 and included a chapter on Strategic Pioneering.

Part of the purpose of this research was to validate the Blonay Profiler. This is an online character profiling tool that I have used in my practice—both leadership programs and consultancy—for the last 15 years. It’s an effective way of highlighting character attributes that might be more conducive to effective innovation and pioneering. The tool rates character preference on three dimensions: 1.) Bold Creative, 2.) Empathic, and 3.) Self-Disciplined. My thesis was that effective pioneers would have a higher than average preference on the “Bold Creative” dimension.

A sample of the pioneers interviewed

Quintin Lake, founder and CEO of Just Good Work. This is a collaborative mobile platform providing migrant job-seekers, workers, and companies with critical information to prevent modern slavery and worker exploitation. It’s based on research that won “Most Impactful Research” at Hult International Business School two years running. This was due, in part, to its influence on modern slavery legislation in Australia.

Megan Reitz, professor of Leadership and Dialogue at Hult Ashridge, and coauthor of a recently published book  “Speak Up”, which is shortlisted for CMI’s Management Book of the Year.

Jon Richards, cofounder and CEO of a highly successful financial services comparison internet business, Yalla Compare. Yalla Compare has expanded across the Middle East and North Africa and is the leading player in the regional online insurance market.

The single most dominant theme in my interviews was that pioneers have an insatiable desire to “challenge the status quo.” As expected, it does appear to be part of their DNA and they do indeed register a higher than average Bold Creative dimension in their character profile, which is particularly significant in Uganda.

“You like questioning everything, its built into you. I do that while I’m driving home.  You can lose all your friends as you are constantly challenging them. I hate the idea that people say, this is the way it will work. This is how it’s always been. They know I will change it.”

But successful pioneers are also great at getting people on board—in contrast to what I hypothesised. They are particularly good at getting a “close network of supporters, who believe in what you are doing” to confide in, provide coaching, bounce ideas off and to hold them accountable. In terms of character, they also have a higher than average Empathic score on the Blonay Profiler. “Find a right and left hand that can walk with you that can fill the gaps of decision making and thinking.  And carry the weight.”

The primary leadership challenge for pioneers is to be able to let go enough, to get others to step up to leadership roles. “How do you allow people to step up when you feel you are right most of the time? Look at Steve Jobs. I’ve not perfected it. I have learned to let other people speak first, as it could be scary to say something different. I let people go first, but you’ll find me rocking in my chair, as I am desperate to say something.”

Other themes included the need for a clear well communicated sense of purpose and values: “We have a vein of true authenticity which runs through the business.”

Another was the need to work with tensions, including those of remaining tenacious and resilient, versus knowing when to adapt, echoing the “Pivot versus Persevere” conundrum highlighted by Eric Ries in his book, “The Lean Startup”.

What influences the forming of these attributes?

I was interested in what helped form the pioneering character. The main themes that I picked up were early life influences, particularly the influence of parents, and aspects of faith, expressed sometimes in religious or spiritual terms.

I particularly wanted to look at cultural differences. I saw this most profoundly when observing the difference in character profile between pioneers and a general sample, when comparing interviewees in UK and Uganda.

We see from the Blonay Profiler diagrams that Ugandan pioneers have a very different profile from other Ugandans from the general sample—a much higher “Bold Creative” preference and a much lower “Self-Disciplined” preference.  This is important, because we know from our much larger base sample that Ugandans have a much higher “Self-Disciplined” preference than what we see from UK respondents.  This does not mean they are more self-disciplined, it just means they are more likely to operate in that mode.  I think this is a strong cultural phenomenon, partly influenced by the highly didactic approach in general education—highly knowledge-based, limited interaction, and limited opportunity to challenge what is being taught. This suggests the need for a significant shift in educational approach, to prepare more Ugandans to be effective pioneers. 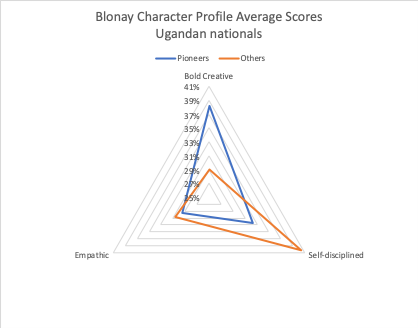 Case studies and a copy of the research report can be obtained by contacting the author.

Unlock your leadership potential with a Global One-Year MBA at Hult. 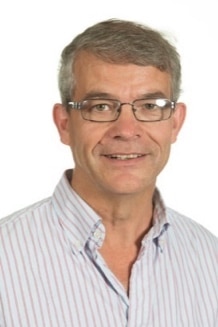 Jamie MacAlister is Professor of Practice, lecturing in Strategy & Leadership and an accredited executive coach at Hult Ashridge Executive Education, Civil Service Learning, and the School of Business & Applied Technology (SoBAT) at Clarke International University in Kampala, Uganda, which he was involved in setting up in 2017. He was previously commercial director at Ashridge Executive Education and, prior to that, a strategy consultant for 21 years. He founded and ran three small businesses, all still operating, and has set up a business in Uganda to export/market consumer products based on tropical health plants. Jamie has an MA Engineering from Cambridge University and MBA (Honours) from Wharton Business School.  Contact jamie@blonay.co.uk or +44 (0) 7710397824.