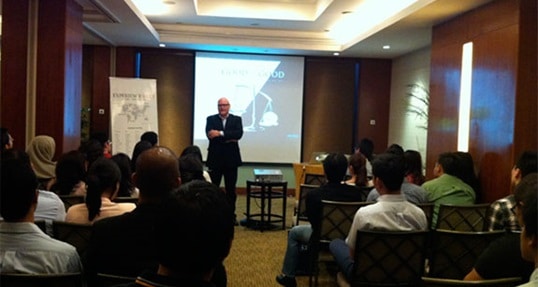 I was in Bangkok, on the last night of a whirlwind 8-country/8-day book promoting tour in Asia. I had been meeting potential students for Hult International Business School when I was momentarily distracted. I looked up at numbers that had been projected on a screen, and I was carried away in a kind of analytical reverie. Maybe the numbers meant nothing—well, statistically I was sure they meant nothing—but I couldn’t help trying to make them tell me a story. The numbers I had been seeing on my tour were beginning to turn my views of Asia completely upside down.

The tour involved a seminar in each city, at which I spoke about my new book, Good vs Good . At each stop, I met between 30 and 60 graduate school-aged men and women who were all considering entering a business degree program. Generally, these potential students were natives of the country where I was appearing—not native English speakers. But all spoke enough English to think they could attend an English-language graduate program, and laughed at the appropriate moments of my English-language speech.

Before arriving at the venue, most of the attendees had filled out a questionnaire asking them to rank the Goods below in the order in which they make decisions. Basically, I was asking them to choose if Equality, for instance, would be a more important consideration than Individuality when making a significant choice.

In the research for the book, I had learned that an individual’s prioritization of these 8 Goods is almost like a fingerprint. 90% of those who have completed the survey have completely unique orderings of these Goods. The other 10% share their ordering with only one other person. And this pattern has held regardless of culture or nationality.

But I knew—from some previous national surveys—that even though individuals are very different, those of similar cultural backgrounds tend to cluster around the same set of Goods. The Japanese, for instance, are more likely to emphasize Life and Relationships, while Americans tend to base decisions more on Belief and Individuality.

One of the highlights of each evening’s lecture was unveiling the results of the survey for each particular city. But more important than how attendees ranked their own Goods was how they ranked the Goods of those around them. Let me explain why.

The very first piece of sociological research I ever conducted was for my undergraduate thesis, comparing juvenile delinquency in Japan to the United States. I spent a summer riding with a “violence gang” (the direct translation of “motorcycle gang”) in Tokyo, and I designed and administered a survey to high school students in both countries concerning their propensity to commit wrongful behaviors. In the draft stage of the survey, my advisor had deftly corrected one of my survey questions, which straightforwardly asked participants if they committed illegal acts, like using marijuana. My advisor explained that teenagers were unlikely to admit in a survey that they smoked pot, but if I phrased the question differently I could get a pretty good idea of aggregate behaviors in any given school. He recommended I write the question as: “Out of your ten best friends, how many use marijuana?”

Here’s a list of the cities in which I held seminars (in my travel order), and the top three priorities of “those around” the participants (the percentage of respondents is also noted). So for instance, at the first tour stop, you can see that 33% of my audience in Beijing listed Joy as the top Good of the people around them, while 18% thought Belief and Growth were the top Goods of people around them.

But with the exceptions of Taipei and Bangkok where Relationships far outstrip the other contenders percentage-wise, in Seoul, Tokyo and Singapore it’s in a close race with the other top Goods. Book after book written about Asian cultures have noted that Relationships (or depending on your language, gwanxi, konne, gwangye, wongswan, etc.) are the keys to business and life in the region—so no surprises here.

I was, however, interested to see that Life did not rank more highly than it did (in my survey of Americans, Life just nosed out Relationships). Manila was the only Asian city where it was ranked, by far, as the most important Good. But in Jakarta and Tokyo, Life tied for first place on the rankings of “Most Important Good”. Perhaps Life’s lower ranking was because of the average young age of my audiences—most in the crowd had not reached the life stages of parenting and elder-care that can make people value Life more highly.

Still, it was the ranking of the other Goods that I found to be the most surprising. Stability got first place votes in Singapore and Tokyo (the only two developed nations on the trip). Growth, by contrast, was among the top three Goods in all the cities except Tokyo and Singapore. Joy showed up as number one in Beijing, and in the top three in Jakarta and Seoul. Individuality and Equality only showed up once each—in third place for Singapore and Bangkok respectively.

Does this mean that Beijingers are more joyful than Filipinos? I’m not sure I’d go there yet. But it does give me a much different view of Beijing than I’ve ever had before. Ditto Singapore, where Growth didn’t qualify for any of the top three spots (but Individuality did qualify for 3rd place). I was also surprised by the fact that Belief didn’t qualify as a top Good in the only Muslim city on my tour, but it did in Beijing—a bit of mind-twister (my hunch is that maybe survey participants in Beijing were thinking about the honesty definition more than religion, but it certainly begs further digging). Tokyo was the only city that was completely predictable to me.

My analysis of the Goods rankings across all 8 cities has led me to only one conclusion: there is a need for more research. Much more! The numbers have begun to tell a fascinating story, but one with big gaps that only additional data can fill. The initial results are certainly startling enough, however, that they may make people question their stereotypes of certain nations. I’m certainly left questioning my own.

John Beck is the Managing Director of Hult Labs. If you are interested in learning more about his latest book, “Good vs Good”—and how you would rank the 8 Goods—you can go here. For an animated explanation on the Goods, check this out:

Hult offers a range of highly skills-focused and employability-driven business school programs including a range of MBA options and a comprehensive one year Masters in International Business. To find out more, take a look at our blog How dancing ballet prepared me to study business. Download a brochure or get in touch today to find out how Hult can help you to learn about the business world, the future, and yourself.