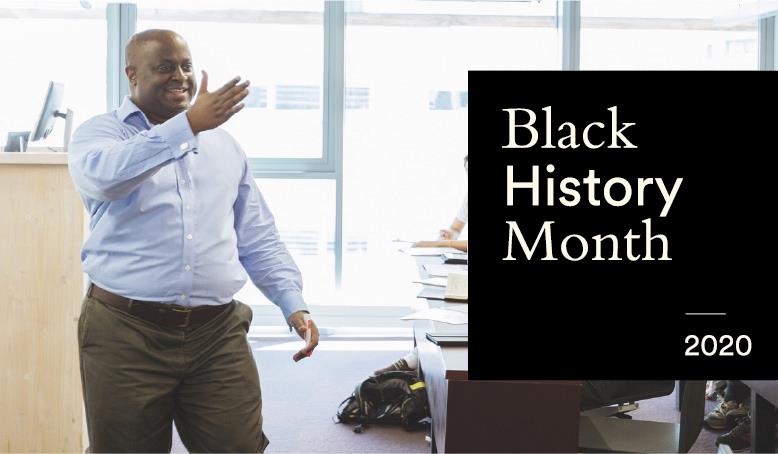 To mark UK Black History Month, we’ve asked our faculty, students, and alumni to tell us about someone from the Black community—past or present—who has been a big influence in their lives and deserves recognition. In this first post, we catch up with Hult entrepreneurship professor, Daniel Rukare, to hear his story and get his personal take on Black history.

Where did you grow up?

I’m originally from Uganda—well my early life was in Uganda. We grew up at Makerere University, where my father was a professor of education. We moved around to places like Swaziland, where he was working, but came back around 1980. We grew up in universities—professors were given accommodation—and were lucky enough to use the facilities, the swimming pools, basketball courts, so we engaged in all sorts of sporting events. My early education was informed by going to government schools in the capital, Kampala, trusting that when I got my A levels I’d get a job and start making lots of money. I didn’t want to go to university then.

I’d get my A levels, get a job, and start making lots of money. I didn’t want to go to university.

Who have you chosen for special recognition during UK Black History Month?

My father. I remember being influenced by my father to go back to education, after working for some time. He said I could always engage in business; that an entrepreneurial mindset will always exist, because that is who I am, but you should always have a safety net—and that safety net is education. And in Africa especially, that speaks volumes. His advice led to my first degree, then I went to the UK for my masters, and motivated me to start my PhD, and eventually I followed in his footsteps and started teaching.

What about him influenced you the most?

My dad had a very soft manner about him—he never imposed himself or his thoughts on others, but also didn’t follow the norms. I think he was very advanced for his time, actually. He’d give soft encouragement. My mother was more by the book—she believed you had to follow the system, get a degree. But it was engrained in me from my earliest days that education provides an independence of choice. It means that individuals are able to create a career path for themselves, not predetermined by the circumstances they find themselves in. Education provides strength and choice, both of which are fundamental to anyone wanting to at least influence what their future looks like.

How does your father’s influence manifest itself in your teaching today?

As an educator now, I believe I’m there to facilitate a journey for my students—to become the best version of themselves. It might mean different things to different people, but if they give it their best and build the right foundation, it will allow for that independence of choice. There will always be challenges—hyper-competition for jobs, which country to live and work in, which industry, which sector—but that’s ok. What I don’t want is for them to be in a position without choices. You want multiple choices, and the flexibility to change your mind.

All individuals need is someone to understand them for who they are.

Why do you think heroes and mentors are so important?

All individuals need is someone to understand them for who they are. To provide that ear, or shoulder, for someone to be able to tap into themselves and ask how they can be their best. Sometimes it’s a dad, sometimes a professor; there are several people who have contributed bits and pieces to my own personal journey. Today, that’s what I try to provide for my students. In my class we create something called the circle of trust. It means we trust in our peers to be able to enquire, to not know things sometimes, and that that in itself is not failure but a foundation on which to learn. I give students the opportunity to showcase their own research and insights to help build creative confidence, not just in themselves, but in those around them. That is what education is all about.

What does Black history mean to you?

I could have gone several routes here, but I’m going to be unconventional—that’s just me, I like to be! I think that Black History Month, with all the history that underpins it, should move into new areas of conversation. And one of them should be around meaningful transformation in business and innovation across jurisdictions, for example, Africa and the West. If we can move to that conversation then I think we’ll start seeing tangible success stories—there are some already, but I think we’ll be able to scale to new heights.

Black History Month, with all the history that underpins it, should move into new areas of conversation.

Look, for example, at the investment opportunities that exist across Africa. There’s a study by KPMG that looks at around 27 countries and the incentives they provide to foreign investors but, surprise, surprise, most of them do not include technological transfer or training of local capabilities in Africa—and for me, that’s where we could be more meaningful. Stories of success do exist; for example, the Indian case study, which has tied foreign capital to indigenous growth and has led to one of the fastest growing SME sectors in India. We can deliberate the methods, but if we can move the conversation to these areas of business transformation and economic empowerment, I think we can be the developers of new innovations and drive radical change.

Professor Rukare is widely published and active in the fields of entrepreneurship and policy development, particularly in the oil and gas sector. As part of his recent research, he has investigated state and corporate responsibility for sustainable development. In 2016, he was voted by students as Hult’s Most Inspirational Professor, in recognition of his creative and engaging approach to teaching.