Home > Community > All about the birds and the bees: London MBA students do their part for the environment 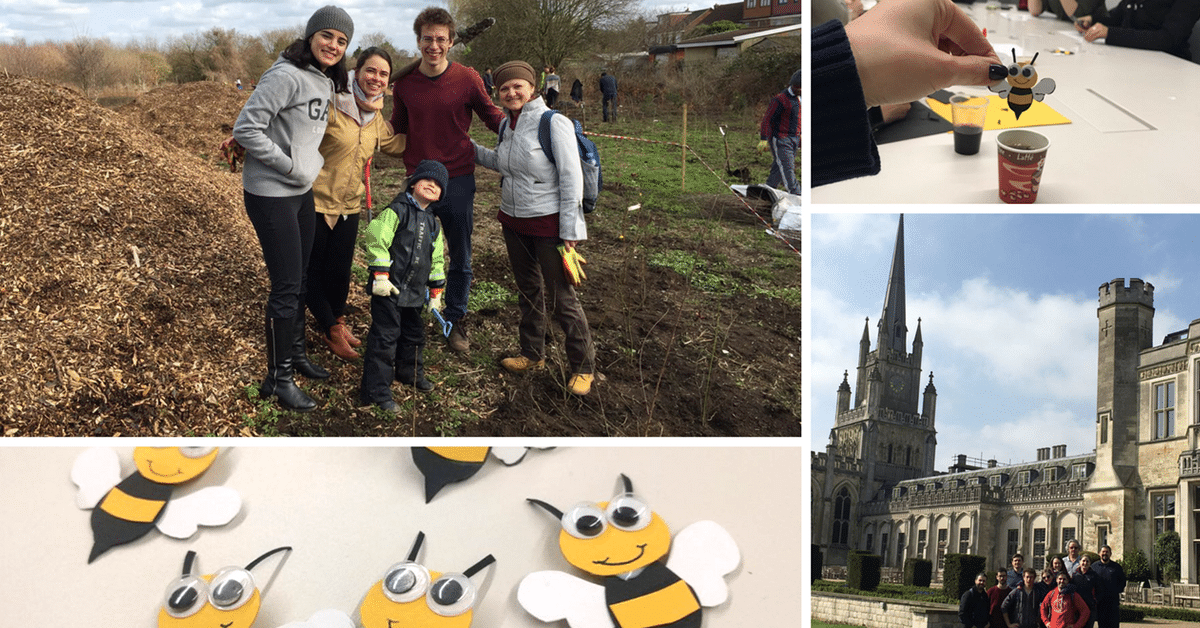 All about the birds and the bees: London MBA students do their part for the environment

Every year, the London postgraduate campus uses almost 20,000 sheets of paper. In an effort to off-set the amount of paper printed on campus, the Environmental Club began the program aiming to plant 1,000 trees during the year. To do so, they raised money through various events and activities, which they then used to purchase seedlings to plant themselves. And yes, this meant toiling outside in the middle of winter!

“… the Environmental Club began the program aiming to plant 1,000 trees during the year.”

The club worked with Trees for Cities, a charity working to bring more greenery into cities worldwide. The organization started in 1993 in London, and as a whole has planted over 680,000 trees.

“President Kévin Poncelet and his team of seven MBA students arranged many fundraising events and activities for this endeavor.”

President Kévin Poncelet and his team of seven MBA students arranged many fundraising events and activities for this endeavor. For Valentine’s Day, they sold cupcakes, cards, sweets and recycled wood roses in the London postgraduate campus. Throughout Module B, they hosted cereal cocktail mornings, where fellow students could pay a small fee to combine different cereals for breakfast.

But funds weren’t really the problem. By the end of February, halfway through the program, the club had planted 300 trees, which wasn’t quite on target to the 1000-tree goal. Before speaking to the team further, I thought there was still plenty of time to get another 700 trees planted before the end of the MBA. I was wrong. It turns out, you can only plant around London when it’s cold and darker. The roots need time to grow deep into the ground. Once the weather gets sunnier and warmer, plants will want to grow upward faster towards the light. If this happens before the roots have established a firm grasp underground, the trees could die, defeating the purpose of the whole activity.

Kévin and the team had a challenge on their hands, and they needed to find a way to get those remaining trees in the ground before the end of March. As many organizations have discovered before, people will often verbalize their support of a goal, maybe even give some money to it, but it’s difficult to get people to act. They needed more volunteers, and Kévin put his improving presentation and persuasion skills to use, making a passionate plea to the MBA class.

“Kévin was able to gather enough volunteers to do a final push at the end of Module B, planting 700 trees in a day at Hult’s own Ashridge estate.”

Luckily, the plea worked, and Kévin was able to gather enough volunteers to do a final push at the end of Module B, planting 700 trees in a day at Hult’s own Ashridge estate.

On a smaller but no less important scale, the Environmental Club’s Andrea Klauss managed a different initiative. With the end of the tree-planting season comes spring, flowers, and bees. Bees are an important but increasingly endangered part of global ecosystems, and the club turned their focus to these small but vital insects. Throughout March and April, Andrea ran crafting sessions to make bee pins. Members of the club then sold pins around the school, at networking events, and on the streets of London. The aim? To raise money for a flower garden at Hult.

The club has more planned, but I think we can all agree they’ve done amazing work so far. Not only are they exercising leadership and team skills, but they’re working together to have a positive impact that will last long after they leave Hult. I hope future generations of students can carry on these worthwhile projects!

Dani has come from the tech world to get her MBA from Hult’s London campus. She has a background in retail software and online education, and her experiences have infused her with a passion for helping people achieve their goals with the right tools. Dani truly embodies the Hult DNA with her dual nationality—South African and German—and international life being educated in China, Japan, and the UK.

Kickstart your career in Europe’s biggest startup cluster by studying at Hult’s London business school. To find out more, take a look at our blog A day In the life of a Hult London MBA student. Download a brochure or get in touch today to find out how Hult can help you to learn about the business world, the future, and yourself.
#MBA #Postgraduate