We invite you to join a virtual corporate masterclass, Driving Business Success With Data & Technology, exclusive to selected companies in the Middle East and Africa.

The pandemic has accelerated the need for businesses to take on digital transformation. It is now imperative for any managers and executives to think about how to put technologies into running day-to-day activities better. This webinar is to provide some first insights into working with technologies. It covers the different aspects of applying technologies at work such as the characteristics, harnessing and processing of data, rethinking of the role of workers, process and workflows, and considerations of using new technologies (why the best technologies are not always the best). Along the way, it sheds some light on the possible gains that can be achieved as well as potential pitfalls that should be avoided. Such a comprehensive overview should help managers and executives to jump-start their technology projects.

You will receive a link to access the session after registration. 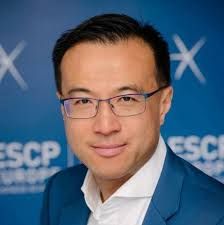 Terence Tse is a globally-recognized educator, author, and speaker. He is a faculty member at Hult International Business School. Terence is also a co-founder and Executive Director of Nexus FrontierTech, a scale‑up that helps clients transform regulatory business processes into competitive advantages using artificial intelligence.

Terence is a co-author of two international bestsellers on Amazon: The AI Republic: Building the Nexus Between Humans and Intelligent Automation and Understanding How the Future Unfolds: Using DRIVE to Harness the Power of Today's Megatrends. The DRIVE framework contained in the latter was nominated for the CK Prahalad Breakthrough Idea Award by Thinkers50, the most prestigious award in business thought leadership. This framework has also led Chartered Management Institute’s own magazine Professional Manager in the UK to name Terence as one of the 18 new voices in 2018 that reshape management and leadership. Talent Quarterly in the US called the DRIVE framework one of the 24 trends transforming talent management in the years to come.

He also authored Corporate Finance: The Basics, which many students have regarded as one of the best books to access such a technical subject.

Terence is also a popular and entertaining commentator and has appeared on many television and radio shows such as China’s CCTV, Channel 2 of Greece, France 24, Japan’s NHK, France’s Xerfi and Radio România Cultural as well as periodicals including the Financial Times, The Guardian, The Sunday Times, The Economist, CNBC, Les Echos, the World Economic Forum blog, Harvard Business Review, MIT Technology Review, Project Syndicate, and WIRED.

Invited by the Government of Latvia, he was a keynote speaker at a Heads of Government Meeting alongside the Premier of China and Prime Minister of Latvia. He also spoke at the intergovernmental organizations including the UN, International Monetary Funds, and International Trade Centre.

Terence has run seminars on technology and digital transformation, megatrends as well as topics in finance and economics for around 50 organizations.

Terence started his career as an investment banker at Schroders, Citibank and Lazard Brothers followed by being a consultant at EY focusing on UK financial services. Terence obtained his doctoral degree from the Cambridge Judge Business School, University of Cambridge, UK.