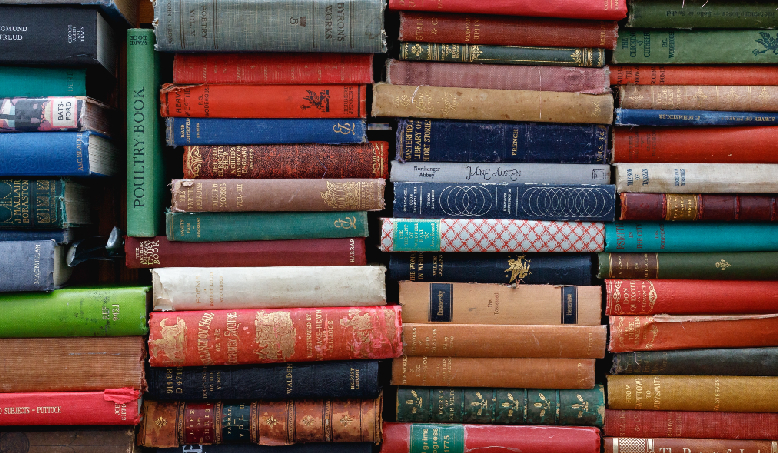 In light of International Women’s Day, we are celebrating the ingenious minds of female authors around the globe who have immortalized their gripping stories and insights.  Hult’s blog ambassadors from around the globe have come together to share the titles that have made it to the hotlist that we bring to you today. This will be a two-part series where we share fiction and non-fiction titles. So, settle back and enjoy!

What’s not to love about dark secrets, crumbling, old mansions, and mysterious family legacies? The gothic thriller gave me life in the first lockdown and I read the paperback copy alongside listening to the audiobook—a proper way to get fully absorbed in it! This was a compelling read thanks to the different levels of eeriness that Ruth Ware plays around with per chapter.

The protagonist, Hal, is a tarot reader from Brighton and lives a tough life struggling to pay the bills and survive on such small pay. Hal lost her mother, but she continued to live on in her daily life as the intermittent voice in her head. 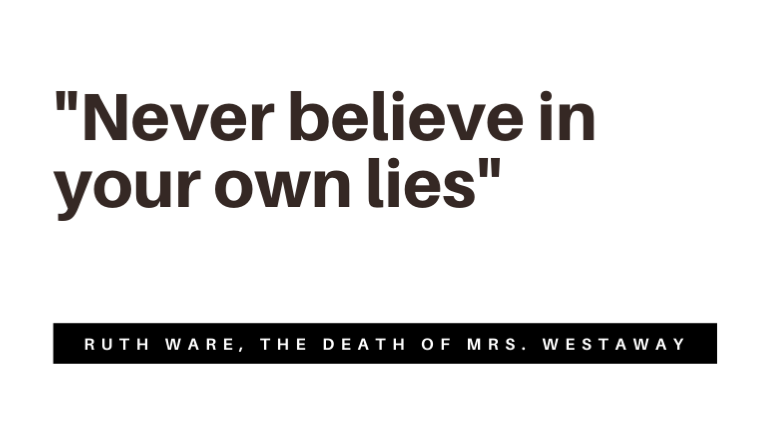 Things escalate when she receives a letter, telling her that about an inheritance left to her by her grandmother, Hester Westaway. She’s dumbfounded as she knows she has no family left but because of her tough situation, she decides to play along with the end in mind to receive a huge sum of money even though she thinks this is all a fraud. Once she gets to her grandmother’s mansion after the funeral, she meets the rest of the shady family.  Some were warm and some were hostile towards Hal. The rest of the novel builds up to reveal a secret that one of the family members has been hiding for so many years. Have a go at reading this and I promise you won’t want to put this down!

If this is up your alley, then Colleen Hoover’s contemporary thriller and steamy read, “Verity” would be something you might enjoy!

What is life without a little love? That is what I thought when I encountered this novel. I picked it up and began to read, for what I planned to be an hour or so. But you see, the issue with love or romance for that matter, is that you can’t plan it. It sweeps you up, spins you around and makes you feel a thousand emotions at the same time. This is how I ended in a five-hour binge.

The novel follows the idea of love at first sight, within two people that don’t believe in love themselves. They make a decision only to see or speak to each other once a year on November 9th, at a specific place; until they fulfil a deadline. The story being full of twists and turns, secrets, and more, wraps you up in more than a simple idea of the perfect romance, and it is far from the perfect cliche love story. 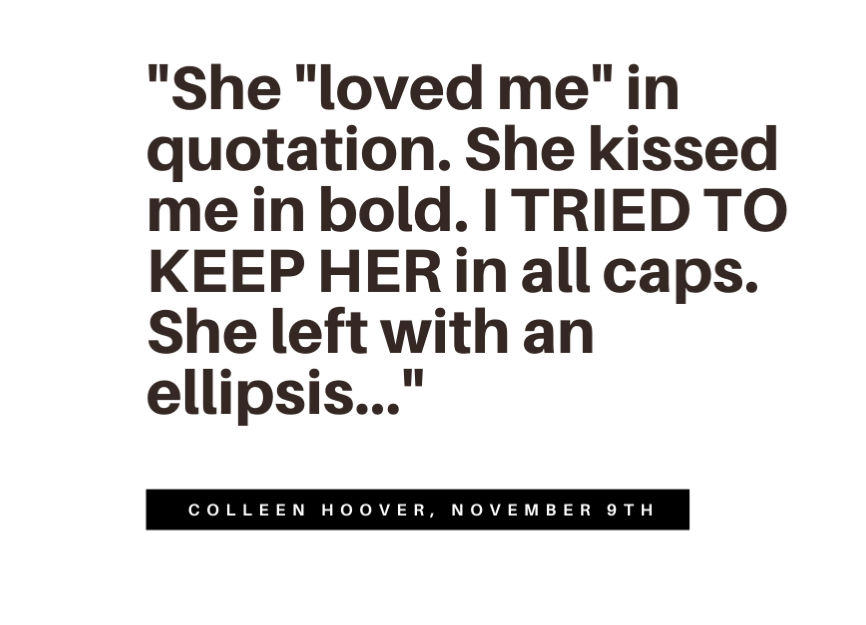 I would recommend this novel to anyone who enjoys the occasional romance novel, but is looking beyond the idea of just the perfect moments. Colleen Hoover has extraordinary writing and great character development each year in which the events take place. All that while keeping you at the edge of your seat as you flip the pages.

If this looks like something you would like to read, I would also recommend “We Were Liars” by E. Lockhart, a novel with more turns than I can begin to explain, but that is worth it in every single way.

The Wind-up Bird Chronicle was Haruki Murakami’s first full-length novel about the stories between Japan and Asia. The book is divided into three big chapters but follows a “mysterious” storyline and time between the main character Toru Okada, his wife Kumiko, and the other related characters.

Haruki Murakami used a metaphor of “twist wind-up bird” throughout the story to highlight a specific theme of what the book is trying to present to its audience. Following a narrative perspective, The Wind-Up Bird Chronicle is characterized by the repeated shifting of several narrators, and with them, the shifting of narrative perspective: one is the narrator, Toru Okada, known as the “Wind-Up Bird,” whose “I” is both the listener and the viewer, through “my” eyes to observe the other characters and the effects of things they did to “the world.”

If you are interested in reading Japanese fantasy novels, or prefer to explore a deeper theme of the book through the storyline, characters, and settings, then this will be a great book for you! Here, you can face the hardest time of exploring the subtle transitions between each chapter and characters; if you read straightforwardly without any interpretations or thinking of what actually happens in the story, you will soon get lost in those chapters!

Haruki Murakami’s longing for reality in this illusory world is where all hope lies when the world and life are in peril. It condenses human beings’ thinking about the world and destiny under the background of previous times, and it is human beings’ longing to return to nature and return to the essential state of life in the state of extreme anxiety. In other words, he tries to illustrate the connections with the real world, especially during wartime through the psychedelic stories.

I strongly recommend this book, and you will enjoy exploring the mysteries and connections between the protagonist and the real world.

The novel is narrated by 15-year-old Kambili Achike, the sheltered daughter of a successful newspaper owner. Eugene Achike also referred to as Papa, is an extremely strict Catholic, judge, jury, and executioner of the family. Kambili lives with her parents and brother, Jaja, in the town of Enugu, Nigeria.

The novel highlights the importance of family relationships and will to seek approval from a Nigerian father. Jaja and Kambili’s lives change, when they go stay with their aunty in the University of Nigeria due to the war and they experience a different life of freedom and laughter.

The style in which the book is written is made very relatable for a lot of people. The outburst of violence shown by Papa towards his wife had led to the rebellion of his children, as fictional as the novel was written, it is a perfect representation of how children act when they experience trauma at a young age and are raised in a household where violence is rife. 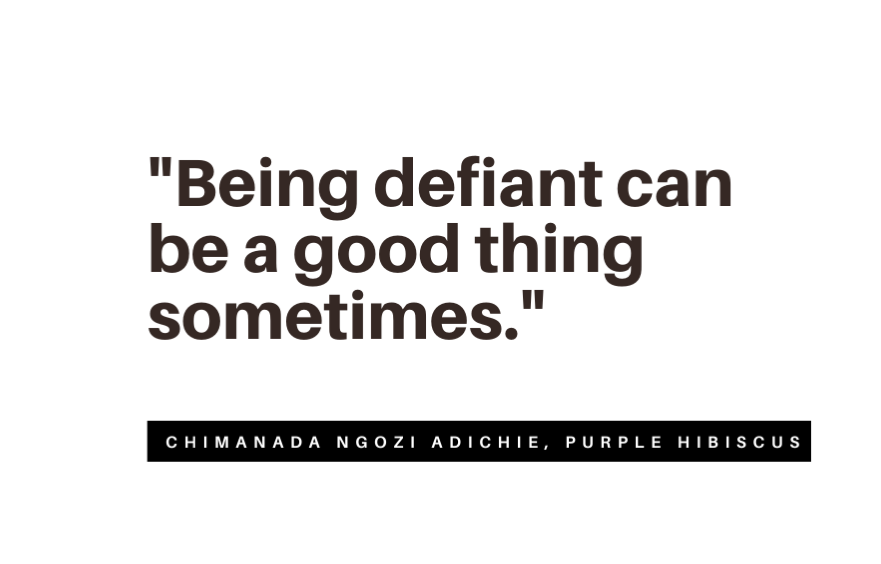 The novel takes a dark turn but delivers the message that things can fall apart very quickly and despite the violence and suffering Kambili’s family went through, Kambili felt a sense of hope no matter what came her way. My summary and review of the novel merely touches the surface of this novel but don’t take my word for it, read it and I recommend you read “Americanah” by the same author.

From bildungsroman, thrillers, romance, to science fiction… one of these titles would make a great page-turner of a companion. Stay tuned for the second part of the hotlist where we give you non-fiction titles! 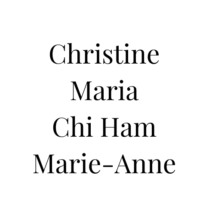